Current Johor govt still has support of all its 29 assemblymen, says Johor MB 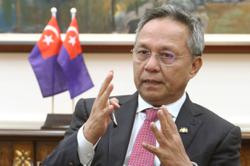 JOHOR BARU: The present Johor government still has the support of its 29 assemblymen, including those from Parti Pribumi Bersatu Malaysia (Bersatu), says Datuk Hasni Mohammad.

The Johor Mentri Besar said that the cooperation between Barisan Nasional, PAS, and Bersatu, which made the foundation of the present government, still continues.

“As the head of the state government, I have yet to receive information about any assemblymen's party status.

“I take it that the present 29 elected representatives still remain with the present government, ” he added.

Hasni said this during a press conference after witnessing a memorandum of understanding between Danga Heights Development, which is a subsidiary of Iskandar Waterfront Holdings, and MCC Singapore, a subsidiary of Metallurgical Corporation of China Ltd, at a hotel here on Monday (Sept 7).

When asked if there would be a dissolution of the state assembly if there is a hung assembly, the Benut assemblyman, who is also the state Umno and Barisan chief, said it would depend on Johor Ruler Sultan Ibrahim Ibni Almarhum Sultan Iskandar.

He pointed out that if a mentri besar loses the majority support of the 56 state assemblymen, the mentri besar would advise His Majesty on the matter.

“Whether or not the state assembly is dissolved, it is up to Sultan Ibrahim, ” he added.

On Saturday (Sept 5), the Bersatu disciplinary board said it would likely haul up former Johor mentri besar Osman Sapian after the coming state assembly meeting.

Its chairman Tan Sri Megat Najmuddin Megat Khas said the Kempas assemblyman would be asked to explain his alleged backing of an Independent candidate in the recent Slim by-election.

“We will give him some time and most probably call him in after the Johor state assembly meeting, ” he said.

Megat Najmuddin said under the Bersatu constitution, Osman’s membership could be terminated for going against party rules.

“However, we have to take into consideration his position as an elected representative in Johor.

“If the board gives a decision against Osman, it might cause the state assembly to be hung and this will force many problems for the present government and people in Johor, ” he said.

The Johor state assembly is scheduled to meet on Sept 10 and 13.