SIBU: SUPP says it is disappointed with the Health Ministry over the issue of contract renewal of medical officers (MO), dental officers (DO) and pharmacists, particularly those from Sarawak.

The party's central education bureau chief, Datuk Ding Kuong Hiing (pic), in a statement on Friday (Aug 28), said it had been following the issue since December 2019 and issued five press statements and three open letters to 222 MPs.

"The Health Ministry, disappointingly, did not reply to any of the letters or press statements," he said.

He said on Aug 3, the Chief Minister, via his principal private secretary, Datuk Khir Busrah, wrote to the Deputy Health Minister Datuk Aaron Ago Dagang to express his support for four Sarawakian medical officers to be given permanent posts.

"Again, the ministry did not even bother to reply to the letter from the office of the Chief Minister of Sarawak.

"The attitude of the Health Ministry is disappointing and arrogant towards the Sarawak government and to the MOs on contract," he said.

Ding said the ministry should implement the policy stated in its Feb 16,2016, directive to all the state Health Departments that medical officers who had passed part 1/part A examination in the parallel routes of MRCP, MRCPCH, MRCOG, MRCS and so on must register with the Medical Development Division.

"Such medical officers will be assisted in training, planning, among other things, including certain placement (rotation posting), so that they can successfully pass the post-graduate examinations within the stipulated time and be eligible to be gazetted," he said.

He said it was the bureau's view that a Sarawak medical council should be formed as a body independent of the Malaysian Medical Council (MMC) to register and regulate medical practice in Sarawak.

He said the plight of Sarawak's contract medical officers showed that the Kuala Lumpur-based Health Ministry has no understanding of the medical predicaments in Sarawak.

He said from December 2019 to February 2020, the ministry and Public Service Department (JPA) in Kuala Lumpur created 100 permanent posts for Sarawak hospitals.

"Sadly, less than 10% of these permanent posts were offered to Sarawakian MOs on contract.

"Thirty MOs from West Malaysia who were offered permanent posts refused to serve in Sarawak," he pointed out.

Ding said the permanent posts should be given to Sabahan and Sarawakian MOs to work in hospitals in the two states. 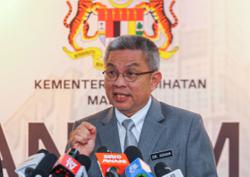