The video, which was released on YouTube on July 28, features an art form known as generative art with background visuals responding to the music.

Alena said the video effects were coded by her cousin Max Jala, after her original plan to shoot it outdoors had to be changed due to the MCO.

“We actually had the storyboard ready to shoot a music video in nature in April.

“We had to scrap that plan and as I’d already promised my fans a new track in July, I reached out to Max to start working on a lyric video, ” she said.

“He coded the video in a process called generative art.

“The code makes the visuals react to impulses of sound, ” Alena added.

She also shared film footage that she already had of the Kelabit Highlands to be used in the music video as she felt it was important to show a visually accurate context for the song.

“During the recovery MCO, we then shot videos of the band to be inserted into the video, ” Alena said.

The Gitu’an video opens with the voice of Tepu’ Ngalinuh Karuh, a songstress and storyteller of the Kelabit tribe who passed away two months ago at the age of 106.

Alena, who is of Kelabit heritage, said she was grateful to have spent some time in Tepu’ Ngalinuh’s presence in the last four years and listen to her songs.

She said Gitu’an, which means “stars” in the Kelabit and Lun Bawang languages, was inspired by the story of legendary Kelabit heroes Tuked Rini and his wife Aruring Menepo Boong who are said to live in the sky and on earth.

“Aruring Menepo Boong could plant and harvest padi very well and that meant she could provide for her community.

“She also had a good collection of beads – her name means Aruring who collects many large beads.

“Beads and padi or rice are still important elements to the Kelabit people today.

“Even though our belief systems have changed, there are still elements of value from the past that are embedded in today’s generation of Kelabits, ” Alena said.

She wrote the song with another cousin, Joshua Maran, as a reflection of their identity and cultural heritage.

“We are who we are because of those who came before us. Parallel to this song release, we are starting a movement called ‘We Are Our Ancestors’ – a line from the song – to encourage people to honour their cultural heritage, ” she said. 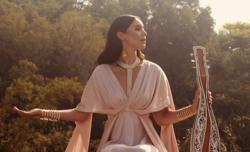