PETALING JAYA: Authorities are currently probing the motive behind the vandalism of the mural in Shah Alam dedicated to the nation’s leaders, says Home Minister Datuk Seri Hamzah Zainuddin.

According to Hamzah, police are looking into several angles, whether it involved criminal intentions or otherwise.

“The police are investigating this issue. There are several angles that we are looking into - who did it and what kind of person (character) did it.

“Once we get the findings of the investigation, we will announce it.

“We will take action according to the law, ” he told reporters during a press conference in Parliament on Tuesday (July 21).

On Monday (July 20), the mural that adorned a wall at Taman Cahaya Alam in Section U12 was found sprayed with red paint and obscenities.

Police have since said the incident would be investigated for committing mischief and provoking the peace through intentional insult under the Penal Code.

CCTV footage, which made the rounds on social media, shows a car stopping at the alley where the mural was painted.

Two individuals, believed to have defaced the portraits, were seen walking towards the wall where the portraits were painted before leaving.

The mural was painted to honour their leadership in combating the Covid-19 pandemic.

It was painted by artists Muhammad Suhaimi, 27, who had conceptualised the project and implemented it with the help of his friends Muhamad Firdaus Nordin, 26, and Abdul Hadi Ramli, 27. 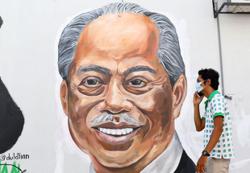