PETALING JAYA: Malaysia’s tourism scene is showing signs of revival but industry players are saying that there are still challenges ahead.

Malaysian Association of Tour and Travel Agents (MATTA) president Datuk Tan Kok Liang (pic) said the industry was on the road to recovery, adding that it would likely see a rebound next year.

“We are on track and in line with the UNWTO’s (United Nations World Tourism Organisation) forecast that signs of recovery for the industry will largely be seen in 2021.

“MATTA and other stakeholders are collaborating with the Tourism, Arts and Culture Ministry to expedite the recovery process, ” he said.

On Wednesday, Tourism, Arts and Culture Minister Datuk Seri Nancy Shukri said that the industry was expected to begin recovering in the second quarter of next year.

However, she said international tourist arrivals and spending were expected to decline by 75% compared to last year.

Tan said tourism players still had to overcome the hurdle of low numbers in international arrivals, especially as borders were still shut.

“Regulatory constraints beyond our control such as lockdowns in overseas countries and weak demand are the main challenges for tourism players.

“We should begin steps to lure international business and leisure tourists to Malaysia as soon as possible under the new norm of strict and rigorous hygiene and safety standards, ” he said.

Malaysia, added Tan, needed to boost its marketing campaign internationally and put forward its success in containing the Covid-19 pandemic.

“But for the international tourism sector, that depends on the opening of borders and availability of flights, ” he said.

Its chief executive Yap Lip Seng said based on reports from its 13 chapters nationwide, the average occupancy rate was about 21.5%.

He said high occupancy was observed over the past few weekends at selected destinations such as Melaka, Penang, Port Dickson, Kelantan and Pulau Redang.

Terengganu and Kelantan, he added, also experienced high average occupancy in July – at 70% and 75% respectively.

However, Yap said it was likely that such high occupancy rates were only for the short-term and that many hotels from other cities had yet to see such a rebound.

“Higher occupancy recorded at these destinations is likely temporary and seasonal, with locals taking advantage of the weekend before school reopens.

“Occupancy in main cities and states such as Kuala Lumpur, Selangor, Johor, Sabah, as well as Kedah and Perlis were still low, with an average of between 12% and 20% at best, ” he said.

“Well-known tourist spots like Pulau Redang, Pulau Perhentian and Langkawi are the first to experience the (positive) impact of domestic tourism.

“However, we need our tourists to be ‘spread out’, such as going to ‘unknown’ places like Merapoh or even some areas in Perak, ” he said. Mita, added Uzaidi, was working with tour agents to promote affordable travel products to Malaysians.

“Most of our tour agents are used to selling outbound products, such as to Japan and Korea, but now, they are learning to promote domestic spots, ” he said.

The industry’s overall GDP contribution amounted to 15.2% in 2018, according to the Statistics Department. 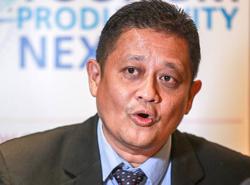