The committee, set up in 2016 by the Barisan Nasional government at the state’s request, had assisted stateless persons in Sarawak by expediting the process of their applications, she said.

The committee was discontinued in July last year by the Pakatan Harapan government as the Home Ministry had decided to set up a special task force to resolve matters related to citizenship applications.

“Now that there’s another change in government, we would like to to request that the committee be revived. Our intention is supported by the Human Rights Commission of Malaysia (Suhakam), ” Fatimah told reporters after chairing a meeting on the issue of stateless children here yesterday.

Fatimah said she would seek a courtesy call on Home Minister Datuk Seri Hamzah Zainuddin to convey the request.

Citizenship applications used to take three years or longer to be processed, but this was cut to about two years with the special committee, she said.

“This was because the committee vetted applications forwarded to us from the National Registration Department.

“We made sure all forms were complete so that applications would not be sent back and forth.

“We also gave our support to genuine cases which we submitted to the Home Ministry, ” she said.

Through the special committee, Fatimah said applications from Sarawak were processed more quickly as they were not placed with those from other states.

From 2016 to last July, 717 citizenship applications from Sarawak were submitted through the special committee. 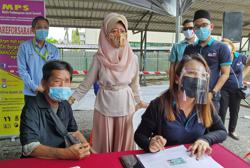