Screengrab from the video.

KUALA LUMPUR (Bernama): Content creator Dustin Pfundheller published a video on his Facebook page "Other Side of the Truth" on May 18, praising Malaysia's swift and effective methods in curbing the spread of Covid-19.

Facebook, however, seems to think the video promotes "false, misleading and deceptive claims”.

The video, entitled "How Malaysia Did the Impossible", lists how both the Malaysian Government and its people worked in tandem to combat Covid-19 and safeguard the people's welfare.

It had amassed over 3.2 million views, but Facebook is now blocking the video’s organic reach and ads on the page - without explaining why.

A frustrated Pfundheller published a four-minute video on July 6 questioning Facebook’s move and explaining why it was uncalled for.

"Not only did I use accurate facts and source many of the areas where I got the information, I also had 30 YouTubers do fact checks on it and review the video - and the only thing I found out from their reviews was that there were (more) things I should have included that Malaysia had done - like giving free Internet.

A dental surgeon who regularly travels the world while providing voluntary medical service, Pfundheller said that he had worked hard to give Malaysia the credit it deserves.

"But when somebody actually does a story (about it), it’s called false and Facebook blocks the video’s organic reach and ads, without explaining why they regarded it as false and misleading, ” he said.

He said there was also no way he could clarify the matter with Facebook, despite the social media giant having an office in Malaysia.

Pfundheller points out that the social media platform may be biased against certain content.

"I think with an organisation as huge as Facebook, it’s important that they treat all people, creators and countries equally.” - Bernama 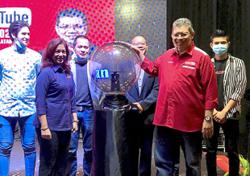 MP asks: Does it mean we need a Finas licence for FB Live, IG and TikTok videos?