KUALA LUMPUR: Three more people are expected to be charged for allegedly beating up and raping a Nigerian woman.

Bukit Aman CID director Comm Datuk Huzir Mohamed, in a press conference at Bukit Aman, said that all three would be charged once their remand orders end on July 2.

The incident came to light after a blog post about the case began making its rounds on social media.

The post alleged that the woman was arrested by police, while no action was taken on the culprits responsible.

City police chief Comm Datuk Seri Mazlan Lazim previously said police initially received a report on the incident from the 30-year-old wig seller who claimed she had been beaten up by a group of men.

"Our investigations revealed that the complainant had gone to the house of her boyfriend in Cheras around 10am on June 4.

"She had only recently met her boyfriend and claimed when she was at the house, she was harmed by the man and his friends," he said in a statement on Wednesday (June 24).

He said police arrested three men and a Thai woman, aged between 28 and 44, suspected to be involved in the incident.

The victim also lodged a report stating that she had been raped on the same day of the beating. 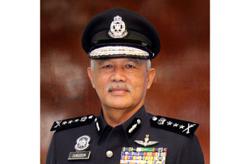