Muhyiddin calls for end to Rakhine crisis with durable results

KUALA LUMPUR: Asean must find an effective solution for the Rakhine state crisis as Malaysia can no longer accept refugees as its resources and capacity are already stretched, says Prime Minister Tan Sri Muhyiddin Yassin.

He called on the United Nations High Commissioner for Refugees to work closely with the grouping to expedite the resettlement process of UNHCR cardholders to third countries as the spillover effects of the crisis continue to impact the region.

“What are we in Asean doing to help each other in finding an effective solution for the Rakhine state?

“Asean must do more to help Myanmar and Myanmar must also do more to help itself for this crisis to be put behind us, and development can take place in a meaningful way,” he said, according to Bernama.

The Prime Minister said this during the 36th Asean Summit, which was held virtually for the first time across 10 cities in the region due to the Covid-19 pandemic. Vietnam hosted it yesterday.

He joined the summit from Putrajaya.

Muhyiddin added that Malaysia was unfairly expected to do more to accommodate incoming refugees.

“Despite Malaysia not being party to the 1951 Refugee Convention and the 1967 Protocol Relating to the Status of Refugees, we have provided humanitarian assistance to the Rohingya refugees and other refugees from Myanmar.

“But this situation cannot continue forever,” he said.

Muhyiddin noted that Malaysia had consistently advocated for a durable solution to the dire plight of the Rohingya in Rakhine state.

The Rohingya are increasingly becoming susceptible to exploitation, including cross-border crimes such as smuggling, human trafficking and slavery.

“Their deprivation and frustration could also lead to potential recruitment by terrorists and extremists, who have remained silent during the pandemic. Their silence must never be misconstrued as inactivity as they still pose a serious security threat to us as a region,” he added.

The Prime Minister also said Asean must adopt a comprehensive approach to combat and contain the irregular movement of people to seriously prevent, suppress and punish trafficking in persons.

Muhyiddin also spoke on Malaysia’s position regarding the South China Sea, saying it had been clear and consistent, with views it should remain a sea of peace and trade.

“Malaysia holds the view that the South China Sea should remain a sea of peace and trade.

“Thus, matters relating to the South China Sea must be resolved peacefully based on universally recognised principles of international law, including the United Nations Convention on the Law of the Sea 1982,” he said.

The Asean Chair for 2020, Vietnamese Prime Minister Nguyen Xuan Phuc, presided over the opening ceremony of the summit in Hanoi, joined by the other leaders of the 10-member grouping back in their own countries. 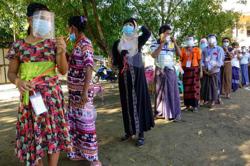 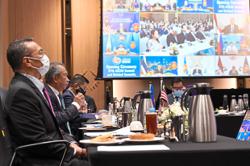