Securing jobs for the city’s homeless

A file picture of a homeless man on the streets of Kuala Lumpur. - AZMAN GHANI/The Star

KUALA LUMPUR (Bernama): A job placement programme initiated by the government for 864 homeless people rescued from the city’s streets during the movement control order (MCO) has enabled 166 of them to secure jobs.

About 70 of them are now working in seven companies, including those operating McDonald’s restaurants, and Jaya Grocer and Tesco supermarkets nationwide.

The remaining 96 will participate in a project that will require them to pack gloves for Top Glove Corporation Bhd. The project will be carried out at two transit centres for the homeless located at Jalan Ampang and Jalan Hang Lekiu here.

The job placement programme, implemented by the Kuala Lumpur City Hall (DBKL) in collaboration with the Federal Territories Ministry, Manpower Department and 19 other agencies, is aimed at taking the homeless off the streets by getting them jobs that pay between RM1,200 to RM1,400 a month, which would enable them to rent their own lodgings.

Federal Territories Minister Tan Sri Annuar Musa said in April that the 800-plus people who were rescued from the streets by DBKL during the MCO period and currently staying in 12 community centres and halls in the city would be offered jobs in factories and as general workers.

Securing jobs for the homeless may be a challenging affair in view of the economic slowdown due to the Covid-19 crisis and the enforcement of MCO to curb the transmission of the disease.

The other challenge is encouraging the homeless to accept employment and making sure they stick to their jobs as many of them have become accustomed to their lifestyle and do not want to be tied down to a full-time job.

International Islamic University Malaysia Department of Sociology and Anthropology lecturer Associate Prof Rohaiza Rokis said she expects the number of homeless people in the city to rise after the movement controls have been completely lifted.

"Where jobs are concerned, it all depends on their attitude ... they can’t afford to be choosy if they want to lead a better life.

"The number of homeless people out there in the streets will depend on the sector they wish to work in. The cleaning sector, for instance, (has many vacancies and) is a good choice for women who wish to earn a fixed income for their sustenance, ” she told Bernama.

Rohaiza also said that another challenge facing the authorities that wished to offer help to the homeless is the existence of syndicates that took advantage of people, especially women, living on the streets.

"Homeless people especially women, senior citizens (and those without educational qualifications) who find it difficult to get jobs in the formal sectors usually end up in the hands of these syndicates who find them jobs in non-formal sectors but make them work long hours and pay them very little, ” she said.

She said homeless women, in particular, find it difficult to find proper jobs as employers are reluctant to hire them due to the stigma attached to them.

Some of these homeless women may have had proper jobs previously but were forced onto the streets due to circumstances beyond their control, she added.

Rohaiza said studies have shown that homelessness is caused by various factors such as job loss, being evicted by landlords, temporary financial instability, and natural disasters.

"Those made homeless due to these factors (mentioned above) are usually only on the streets for a short term and their problems can be resolved with the support, guidance and help of others.

"Those that are homeless over the long term are a cause for concern, ” she said, adding that in the case of homeless women, most of them came into that state after facing domestic violence or were chased out by their own families.

Pointing out that homeless women were easy to rehabilitate, Rohaiza said the authorities should provide them with training to enable them to get jobs.

"They should also be made to participate in motivational programmes from time to time to prepare them for the responsibilities of working life so that they can take care of themselves, ” she added.

Back on the streets

Universiti Pendidikan Sultan Idris Counselling Centre director Dr Fauziah Mohd Sa’ad said the authorities have to look into various aspects in their efforts to help the homeless to find jobs and assimilate into society.

"The homeless can lead normal lives if they are given jobs but I won’t be surprised if they return to the streets from time to time ‘on a temporary basis’ due to financial issues.

"This is common and will continue to recur... this is because some of them have been living on the streets for so long that they are already used to it, ” she said.

According to Fauziah, some homeless women are reluctant to stay in DBKL’s transit centres as they are afraid that their children may be taken away from them by the Social Welfare Department.

"These women don’t mind living on the streets as they can get food from donors. To ensure their safety, they would sleep in the same place and look out for each other, ” she added. – Bernama 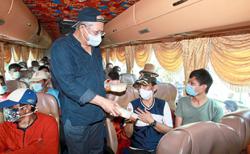