SIBU: An unemployed man was arrested for alleged drug possession in in Bintangor near here.

Bintangor OCPD Deputy Supt Sekam Anoi said at about 1.50pm on June 14, a police team conducted a drug raid on a house on Jalan Sekolah.

DSP Sekam said the 47-year-old suspect, who tested positive for methamphetamine use, has a history of drug abuse.

The suspect has been remanded and the case is being investigated under Section 39A(2) of the Dangerous Drug Act 1952, which provides a life sentence and not less than 10 strokes of the rotan if convicted. 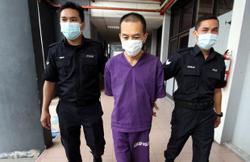