The verdict on the mandatory death penalty out on Aug 13

PUTRAJAYA: The Federal Court’s nine-member bench will deliver its verdict on Aug 13 in the appeals brought by four individuals who are challenging the laws which impose the mandatory death penalty in drug trafficking and murder cases.

Court of Appeal president Datuk Rohana Yusuf, who led the bench, set the date after the court completed hearing submissions from the prosecution and defence in those cases.

The appeal proceedings reconvened yesterday in the modified courtroom held in a banquet hall in the Palace of Justice to comply with the physical distancing rule, which could not be imposed in the usual courtroom due to the size of the court and number of people involved.

Deputy public prosecutor Datuk Nik Suhaimi Nik Sulaiman argued that Section 39B of the Dangerous Drugs Act (DDA) 1952 and Section 302 of the Penal Code were enacted within the framework of the legislative power and the competence of Parliament to enact.

“Parliament can prescribe such penalty as it thinks fit for the offences which it creates. It may make the penalty absolute in the sense that there is but one penalty which the court is empowered to impose and it may lay an unqualified duty on the court to impose that penalty,” he said.

Section 39B of the DDA and Section 302 of the Penal Code provide the mandatory death sentence for those who were found guilty of drug trafficking and murder offences.Nik Suhaimi said a judge’s role was not to make law but to uphold and apply the laws as passed by Parliament, adding that the law must be interpreted and applied by the judges to different cases which include exercising of discretionary power in sentencing based on the penalty provisions made by Parliament.

He added that Parliament had been given the powers under the Federal Constitution to legislate on civil and criminal law and procedure and the administration of justice, including the jurisdiction and powers of all such courts.

“To change or modify the express provision of Section 39B of the DDA 1952 and Section 302 of the Penal Code would be a serious departure from the law and would result in total uncertainty,” he said.

The appellants, Peruvian Jorge Crespo Gomes, South Africans Letitia Bosman and Benjamin William Hawkes, and P. Pubalan, a Malaysian who owns a security company, were appealing against their convictions and death sentences imposed on them by the High Court.

Gomes, Bosman and Hawkes were separately convicted and sentenced to death by the High Court between 2015 and 2016 for trafficking drugs in 2013.

All three lost their appeals at the Court of Appeal.

Pubalan was convicted of murdering his brother-in-law and was sentenced to death by the High Court in 2016.

He also lost his appeal, which was dismissed by the Court of Appeal in 2018.

Lawyer Datuk Seri Gopal Sri Ram representing the four appellants argued that Section 39B of the DDA and Section 302 of the Penal Code were unconstitutional because they violated the judicial power which encompasses sentencing discretion.

“The appellants’ case is that there should be a discretion in the courts to determine the appropriate sentence in individual cases,” said Sri Ram, adding that the right to be heard in mitigation is an integral part of the right to a fair trial.

He said that in France, the courts were given the discretion when imposing a sentence on murder cases.

In line with the Federal Court’s decision in the Semenyih Jaya case and further affirmed in M. Indira Gandhi’s and Alma Nudo’s cases was an affirmation that the separation of powers doctrine was a basic feature of the Federal Constitution. 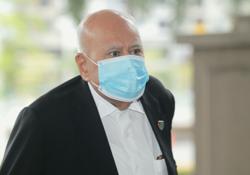