KEPALA BATAS: A surprise visit by a police team at a birthday party here Sunday (May 31) resulted in 14 people, including a woman, being detained for breaching the movement control order (MCO).

"During the raid, the birthday boy was about to cut the cake before police rushed into the apartment unit.

"All of those present, aged between 28 and 32, admitted to attending the event to celebrate the birthday of their friend," he said in a statement Sunday.

ACP Noorzainy said during the inspection, those detained had not practised social distancing and attended a social event.

He said a search of the apartment unit, however, did not find any contraband material.

He said those detained have been brought to the North Seberang Prai headquarters and have been issued RM1,000 compounds each for violating the MCO.

He said they were issued compounds under Regulation 7(1) of the Prevention and Control of Infectious Disease Regulations. 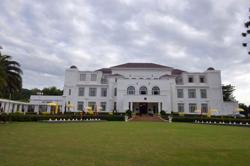