The Senior Minister said the taskforce, led by the police and which is supposed to monitor and enforce the standard operating procedure (SOP) for the MCO, conducted 97,552 checks nationwide.

"The police arrested 156 individuals on May 23 and 50 of them were remanded for breaking the SOP," he said adding that a total of 162 roadblocks were also in place to curb interstate travel.

Ismail said a total of 157,364 vehicles were checked at these roadblocks with 1,158 vehicles told to make u-turns for trying to "balik kampung" without police permission.

He said this was compared to the 1,613 vehicles told to make u-turns the day before.

"On sanitising operations of public places conducted by the Housing and Local Government Ministry, 7,045 operations were conducted since March 30 including in 78 yellow and red zones," he said.

"Yesterday (May 23), a total of 21 operations were carried out involving seven red and yellow zones including 12 at Sabah, four at Sarawak, three at Kedah and one at Negri Sembilan and Labuan," he said.

On the management of quarantine centres, Ismail said a total of 270 were in operation as of 8am on May 24 compared to 271 the previous day.

"Yesterday, 271 Malaysians entered the country from Singapore, Indonesia, Qatar and Japan and have been quarantined.

"In total, we have quarantined 40,264 Malaysians who have come home from overseas since April 3," he said adding that 32,287 individuals have completed their mandatory quarantine process and have been allowed to go home. 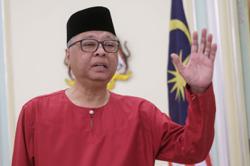 Drive-in cinemas get the green light to operate