PETALING JAYA: Most Malaysians feel that wearing face masks in public and avoiding mass and crowded gatherings would remain the norm even after the movement control order (MCO) is lifted, a survey revealed.

A poll by international agency YouGov Omnibus found that 77% of the 1,068 people surveyed felt that wearing face masks in public and crowded places would be among the practices to remain after the MCO is over.The MCO, which was first imposed on March 18, has been extended several times – the most recent one until June 9 with more relaxed conditions.

The survey, which was provided to The Star, also showed that 75% believed that there would be fewer mass gatherings such as sports events and festive celebrations after the MCO.

About 58% of Malaysians believed that more facilities to work at home or even online learning would remain, while over half foresaw fewer open-air markets such as wet and night markets and festive bazaars.

Some 52% felt that more restricted overseas or interstate travel could continue while 47% believed that intermittent periods of MCO would be called to curb the spread of Covid-19 infections.

Asked on what they hoped to be put into place after the MCO period, about 85% said hand sanitisers should continue to be provided at crowded places such as transit points like train stations and airports, and shopping malls.

Another 83% hoped that there would be an improvement in hygiene at eateries and commercial building complexes while 81% would like to have social distancing and queuing in place to ensure there would be no overcrowding.

The survey also found that personally, 86% of Malaysians would continue to avoid crowded places or attending events with mass gatherings.

A total of 77% polled said they would choose to wear face masks in public and keep updated on news about Covid-19.

He said the success of the earlier phases of the MCO had resulted in the Covid-19 “R0” value going down from 3.5 to 0.3.

R0 (pronounced r-nought) refers to the infectivity of a virus at the beginning of an outbreak in the community, that is, the average of how many people can be infected by a positive case.

Dr Noor Hisham said lowering the value of R0 to less than one continuously would help to end an outbreak.

MCO: Schools prep for re-opening ahead of announcement 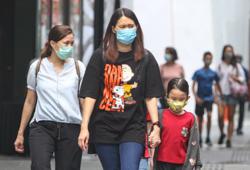