For some, staying at home means being stuck in a tiny space./ Pix by Anak Kami

While out on her regular trips to provide food to communities in need under the Darul Jariyah Welfare Association, she saw a scrawny young migrant worker picking on leaves in the bushes.

“I asked him what he was doing, but he can’t speak Malay so he showed me a sad face, then rubbed his tummy, signalling his hunger, ” said Jalilah, fondly known as Kak Jah, the founder of the Darul.

The man is one of the countless daily wage workers across Malaysia - local and foreign - who are now struggling to survive the MCO period brought upon by the Covid-19 outbreak.

Daily wage workers are those who survive on odd jobs in exchange for daily compensation, and most such workers in Malaysia survive on a day-to-day basis, without much in the way of financial security.

While the Human Resources Ministry previously said that daily wage earners must be paid based on their agreements with their employers, most of them, especially in the small business industry, do not have proper employment contracts.

As a result, most are now dependent on charity and the support of non-governmental organisations just to survive the MCO period.

The Star’s R.AGE team recently reached out to some daily wage workers, and the NGOs helping them, to see how they are coping.

One of those we spoke to is Siti (not her real name), a young mother who has been taking her new-born son to hospital on a motorcycle, as she simply cannot afford any other form of transport now.

Siti takes care of her three children and two younger siblings, and they all depend on her husband’s income, which is normally RM40 a day, as an assistant at a food stall.

But with the MCO in effect, the only work he could find is as a runner for small home businesses, earning a measly RM3 per trip.

“With his normal income, we could pay for my siblings’ school needs, our food, diapers and milk for my children, and even petrol.

“But now he isn't allowed to work, so we have no income, ” she said, from their small three-bedrooms home.

In desperation, Siti said they've been selling their own household items, including the cooking gas cylinder.

“The MCO extension gives me mixed feelings. I feel sad because it means my husband can’t work and we will be running out of cash, but I also feel that it is a good initiative to break the chain of infection and I don't have to worry about my siblings going to school during this pandemic, ” she added.

For Amira (not her real name) and her family of four, staying home means being crammed in a tiny space inside the workshop her husband rents for his work as a mechanic, where he normally earns around RM30-50 a day.

The area they’ve been living in for about a year is so small that it can only fit a queen size mattress, a gas stove, and a cupboard to store their belongings.

“Before this we lived at my father’s place but we had to move out because my other family members wanted to sell the house, ” she said.

Natasha Priya Dev, 34, who is in event management, said she is down to her last two ringgit.

She said that many event crew workers are paid per day, which means most are not earning any money at the moment with public events not allowed under MCO.

"Our income has been zero since the MCO started. Customers started to cancel events and ask for refunds.

"Our landlord is reducing our water pressure and he said he will stop the water if we don't pay the full amount of our rent," said Natasha, who lives in Shah Alam.

She is now hoping to cook and sell food just to survive the MCO, and has also organised online classes for those who want to learn about balloon sculpting, face painting, and DIY toys.

While Malaysians can still apply for government support, migrant workers, especially those who are undocumented, are forced to take shelter in abandoned buildings, scavenge in dumpsters, and forage for wild leaves to survive.

Kardi and over twenty of his friends are among those left stranded by the factories they were working at.

“We divide the space among ourselves, so some people stay here, others sleep at the other factory. We just sleep anywhere that we can.

“There are Bangladeshis, Pakistanis, Myanmarese and even those from Sarawak who can’t go back to their hometown, ” he said.

“Some who owe ah long (loan sharks) for example, their bank cards are with the loan sharks so they don’t get the money.

“Some of the Welfare Department or Zakat recipients are bedridden so they can’t go to the bank. They might get their children or relatives to help, but with the MCO, they can’t even do that now, ” she said.

Suraya’s association is now getting help from runners to help these families survive.

Nevertheless, the struggle that migrant workers are going through just to be able to eat and survive has been an eye-opener for her.

“We went to a kongsi (migrant worker housing) in Klang, and we saw them drying excess rice and Dhal to avoid food wastage, and so they can have enough supply until the end of the MCO.

“It is a very sad and humbling experience for me, and it makes me reflect on my life and my children. Now I hardly waste food, and I tell my kids to do the same, ” she said.

A senior HR manager with 20 years’ experience, Koljit Singh Koldip Singh, said it was important to educate the public, especially day wage workers, on the need for proper employment documentation before accepting any job.

Small businesses in Malaysia often fail to adhere to these requirements, and engage people based on verbal contracts, said Koljit.

“Daily wage workers are often not aware they are required to have employment contracts, so we need to educate all walks of life about this.

“It does not matter if you are doing a part time, full time, half day or even hourly job -- you need to have an agreement on how to be compensated, ” he said.

Koljit added that the government could possibly provide daily wage workers with financial assistance, but it’s difficult to do that when there’s no official information or statistics, since their employment is all informal.

For now, all the affected families can do is practise sound financial planning and cost-cutting.

“They need to plan six months ahead, so if they get RM1,600 (in government aid), they need to divide it in six months, and remember that we need to spend just to ensure survivability, ” she said.

Akmar said those in need could also reach out to federal or state agencies that provide financial support or even their family and the non-governmental organisations.

“Also try to get information about NGOs that are helping those in need. This is not the time to be shy, or to be egoistic.

“You must remember that (the pandemic) is not only affecting you, or your family but it is affecting the whole world, ” she added. 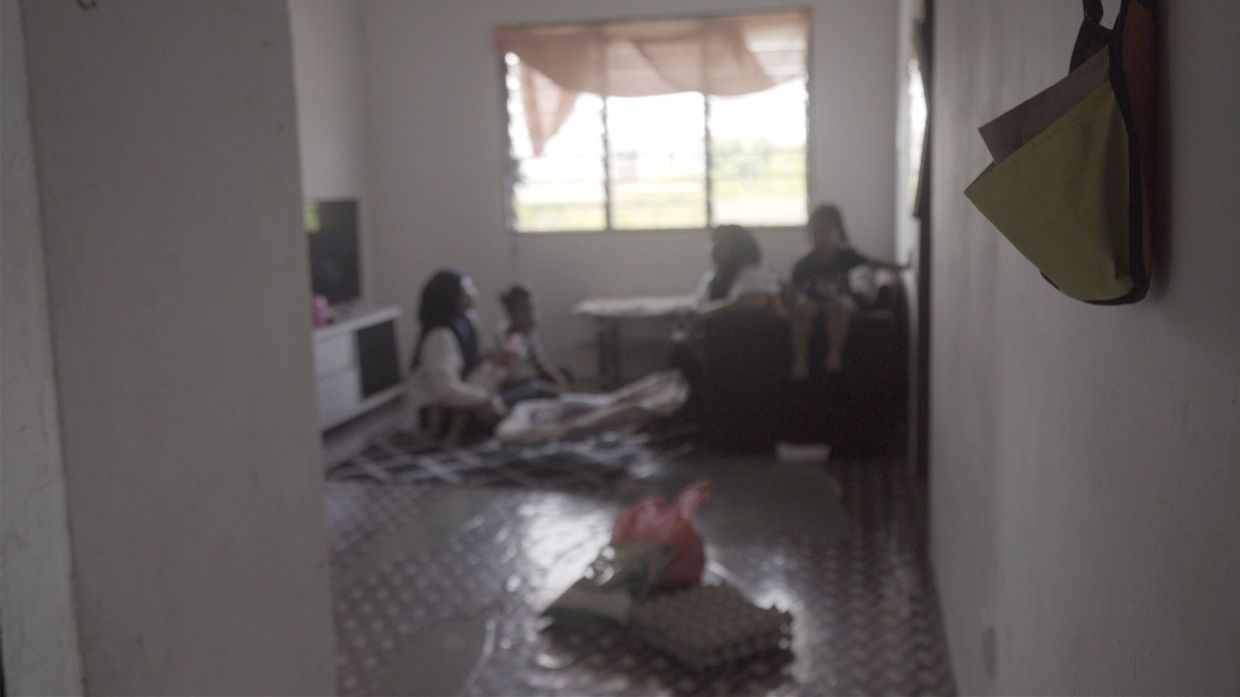 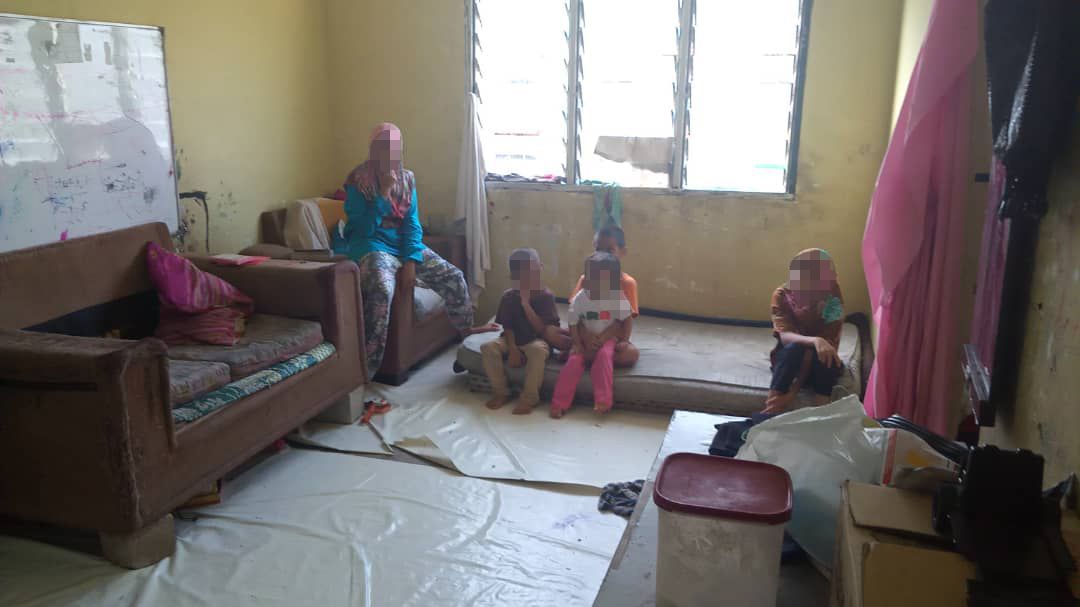 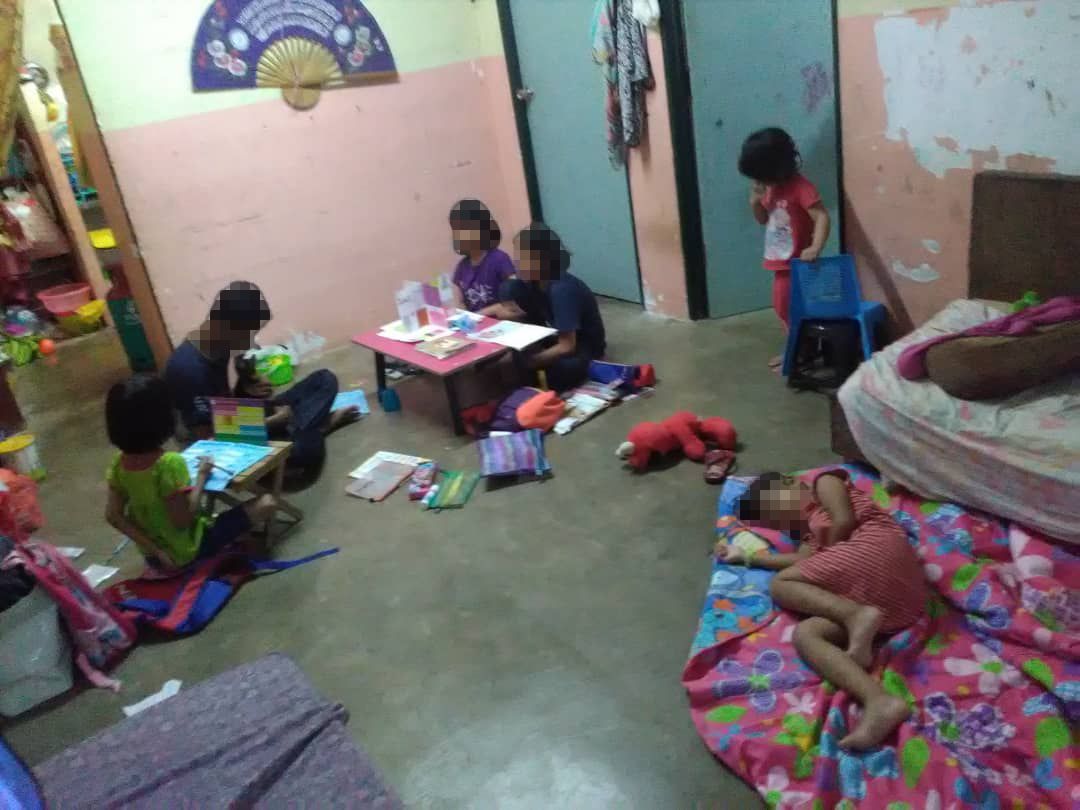 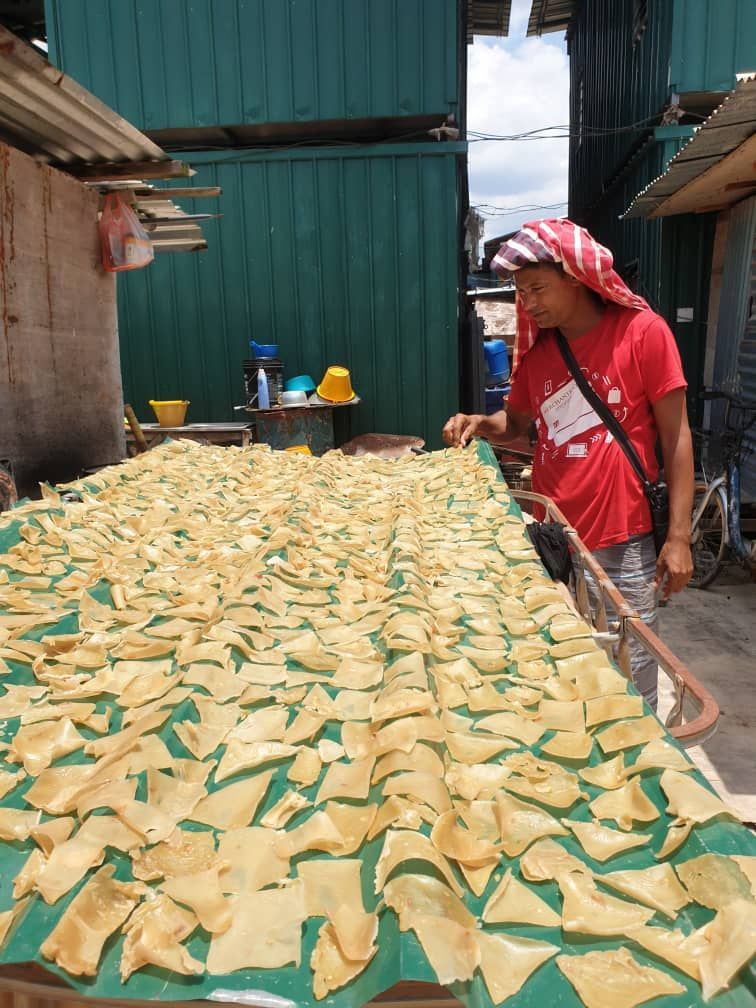 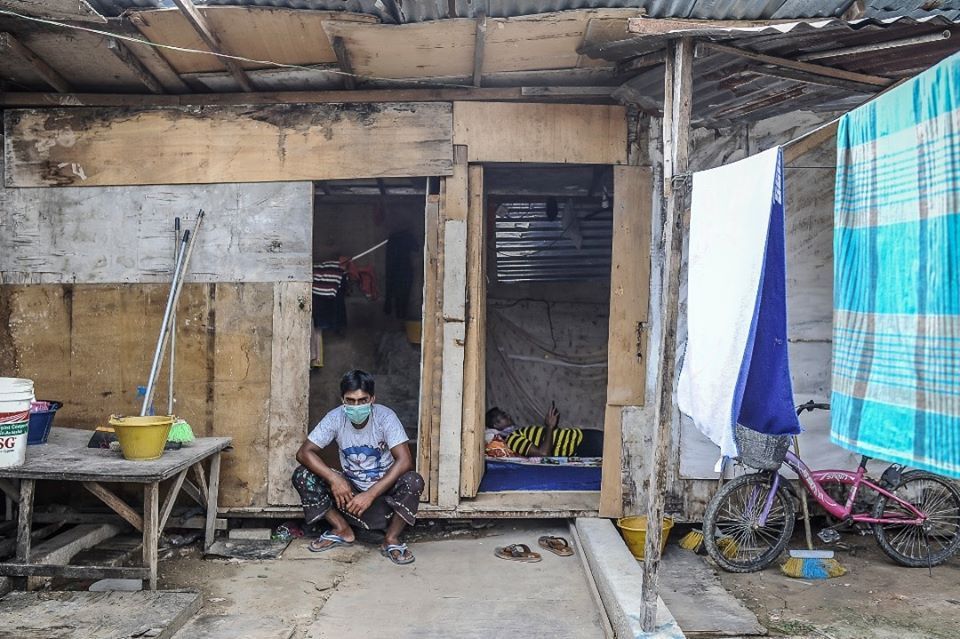 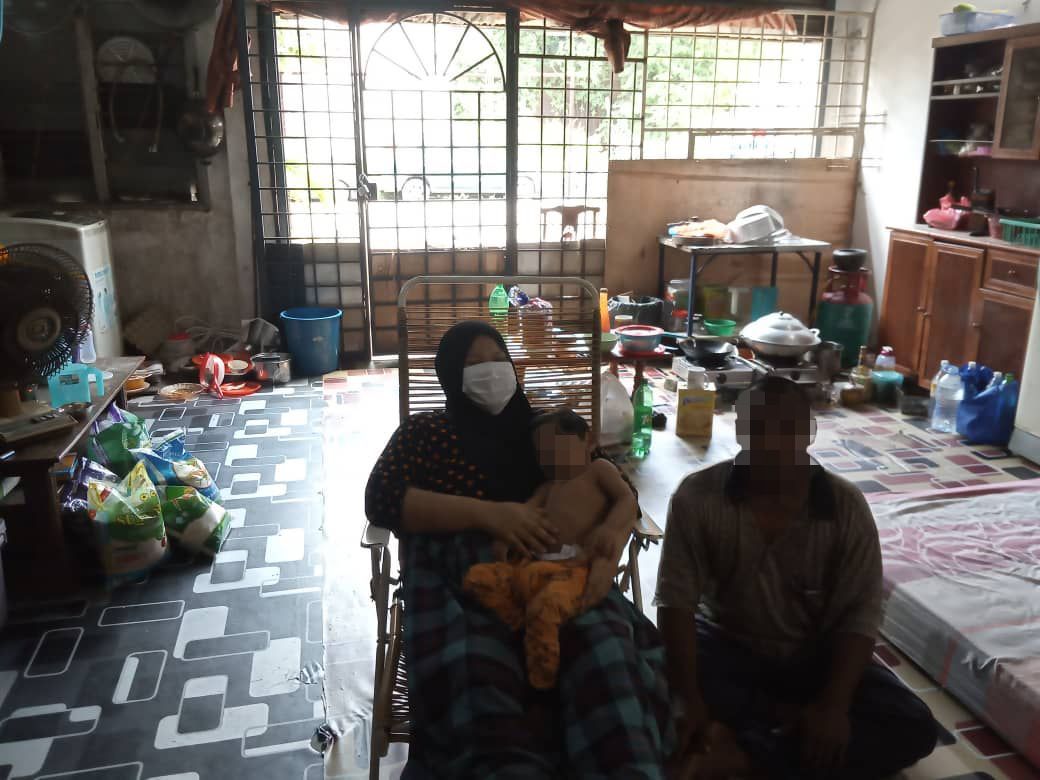 Siti had to sell their household furniture and appliances to buy food for the family./ Pix by R.age

One of the families in Bukit Beruntung that receives contribution from Jalilah./ Pix by Darul Jariyah

Amira lives in a motorbike workshop that they are renting.

A foreign worker drying excess rice and Dhal to avoid food wastage, and so they can have enough supply until the end of the MCO./ Pix by Anak Kami

A family of five is living in a dilapidated flat./ Pix by Darul Jariyah