MIRI: The restrictions on public movement is making life very difficult for homeless folks, especially during the night and pre-dawn hours, as they have no place to sleep.

They can no longer sleep in open spaces or five-foot ways of shoplots and buildings in town and they have no money to rent rooms.

The Star found several homeless folks wandering aimlessly in Miri city centre due to restrictions imposed under the movement control order (MCO) to curb the spread of Covid-19.

They are already facing difficulties in getting food due to the closures of food stalls.

Come nightfall, they are forced to sleep in dark, stinking back lanes away from the glare of enforcement units.

A few of them told The Star they have been harassed by drug addicts and alcoholics who are also occupying these dark alleys.

A homeless man, Uncle Chin, who is in his late 60s, said he is not married and had ended up on the streets of Miri after he lost his job as a contract factory-labourer last year.

"This is a difficult time for me.

"Last time, I can sleep at the market area and bathe there but now I get scolded by people in uniform who tell me I cannot be in public anymore at night.

"Where can I go to sleep?" he asked when met by this reporter.

Another homeless duo, a husband and wife pair, can be seen pushing their cart of belongings and trying to sleep in the back lanes.

They too said there are drug addicts and alcoholics harassing them in these backlanes.

The Star have referred their plights to the Miri Welfare Department.

A senior officer said there are no temporary shelter facility for homeless people in Miri.

"We do not have any vacant building that can be used as a shelter for the homeless.

"This matter had been discussed before but the worry is that if we allocate a shelter for them, there will be a rise in the homeless situation due to masses of people coming to the city and then claiming they need to live in the shelter as they are homeless.

"Having such a shelter has its advantages and also potential disadvantages," she said.

The Star have referred this issue to the city council and religious groups to see if they have any vacant premise that can be used to house the homeless until the MCO restriction is over. 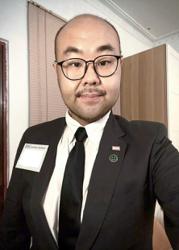