PETALING JAYA: Kelantan mufti Datuk Mohamad Shukri Mohamad has been admitted to the hospital on suspicion of Covid-19 infection after returning from Sarawak with a fever and sore throat, a news portal reported.

According to Malaysiakini, Shukri experienced pain in his joints after returning from Sarawak and was given medical leave after he went for a check-up on Sunday (March 15).

However, his fever did not subside, so Shukri went to the clinic again to get a check-up and was then told to go for a preliminary test.

He was admitted to the Raja Perempuan Zainab II Hospital on Wednesday (March 18).

“He is now under observation, especially due to the current Covid-19 situation.

“The hospital told us that there is a bacterial infection, but we still don’t know the details," a family member told Malaysiakini on Thursday (March 19).

Shukri is said to be in a stable condition.

The family member also said that everyone in close contact with Mohamad Shukri had been told to go for a health check-up as well.

“We hope the public will pray for him and not spread fake news about him," the family member said. 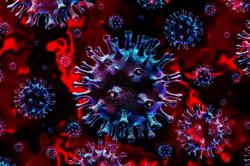