KUALA LUMPUR: A witness told the High Court that he was unaware that five cheques amounting to RM366,000 that were converted to Australian currency for a home purchase deposit were eventually made out to Messrs Lewis & Co, a trustee of Yayasan Akalbudi belonging to Datuk Seri Dr Ahmad Zahid Hamidi.

Retiree T. Rajan, 69, said he only wrote down the date, amount and signed the cheques without writing the name of the payee, before handing them over to a money changer.

“I cashed the cheques sometime between June and July 2016.

“The cheques converted to Australian dollars amounting to over A$90,000 were as initial payment for the purchase of my daughter’s house in Australia, ” he said during examination-in-chief by deputy public prosecutor Harris Ong Mohd Jeffery Ong.

He said this at the 20th day trial of Ahmad Zahid, 67, who is facing 47 charges – 12 for criminal breach of trust, eight for corruption and 27 for money laundering – involving millions of ringgit belonging to Yayasan Akalbudi.

Harris: Why did you leave the payee’s name blank and just filled in the amount, date and signed the cheques before handing them over to the money changer?

Rajan: I usually leave the space blank each time I cashed the cheque when I want to travel abroad and I would usually hand over the cheque to an individual named ‘Omar’ at the money exchange booth.

Harris: When did you come to know that the cheque was paid to Lewis & Co?

Rajan: I only learned that the cheque was payable to Lewis & Co when the bank contacted me two weeks later.

Harris: After the bank informed you that the cheque was issued to Lewis & Co, what was your reaction?

Rajan: Nothing. I don’t know who Lewis & Co was, I got my money. The bank asked me if I had issued the cheques, I answered yes.

Earlier, two bank officers from CIMB and Maybank told the court that the cheque transactions from Syarikat Ekares Sdn Bhd and Rajan that were credited to Lewis & Co in 2016 were not illegal.

The duo, who took the stand yesterday as the 40th and 41st prosecution witnesses respectively, verified this during cross-examination by counsel Haziq Dhiyauddin Razali, who was representing Ahmad Zahid.

When questioned by DPP Ahmad Sazilee Abdul Khairi during re-examination whether the bank was aware of the purpose of the payment, Sharifah Aspaniza replied in the negative. 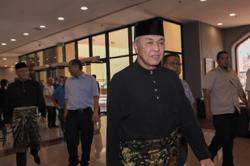 Zahid escapes from being cited for contempt