He admitted that the party is currently split between him and Tan Sri Muhyiddin Yassin.

"We are still one party but a part of the party has accepted (Datuk Seri) Najib (Razak)," said Dr Mahathir.

Asked which faction is the "real" Bersatu, he replied: "We are still one Bersatu but there is a faction that follows Najib."

Pakatan Harapan's 22-month stint as the Federal Government came to an end following Bersatu's withdrawal from the coalition and Dr Mahathir's shock resignation on Feb 24.

Some Bersatu members, together with Barisan Nasional and PAS, have since come together to form Perikatan Nasional, which has endorsed Muhyiddin as the country's eighth Prime Minister.

Gabungan Parti Sarawak (GPS), which has 18 lawmakers, has pledged its support for Muhyiddin and has since said it would join the Federal Government.

To another question about Muhyiddin's statement that he had assumed the role of Bersatu acting chairman, Dr Mahathir said there was no such thing.

"The party's constitution provides for only one chairman.

"He is not acting. I am still the chairman. What's this about him being acting chairman? I did resign earlier but I later re-accepted the post.

"There will be an election in Bersatu soon to decide who leads the party," he told reporters after attending a feast at Dewan Wawasan in Jitra Saturday (March 7).

Mukhriz, who is also Bersatu deputy president, took to the stage to deliver a briefing on the present status of the Kedah government.

He reaffirmed that everything was under control based on "kata sepakat" (mutual agreement).

“The state does not face big problems. The government voted by the people in the 14th General Election is still ruling the state.

"We will make sure that all promises made will be carried out and fulfilled before the next general election.

"The welfare of the people is the top priority, ” he said. 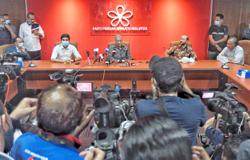 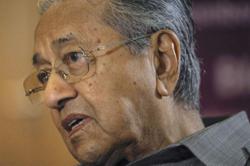