Sarawak PKR gears up for election

The symbolic launch was held at the Miri PKR state election operation centre in the city centre on Sunday night during the party’s Chinese New Year open house.

Dr Teo said Sarawak PKR would use Miri as its base to cover election preparations but would also include Baram, Lawas and other northern constituencies in its operation plans.

“There are indications the state election is already very near. Even though the deadline for the state polls is about one year and five months away, the latest indications are that there could be a snap election within this year.

“We in Pakatan cannot be caught off-guard and have already trained our core team for the northern seats, ” Dr Teo said.

“I won the Miri parliamentary seat by about 14,000 votes during the last general election.

“Pakatan will capture all the three seats this time around, ” he said.

Federal Court ruling for holding Australian citizenship when he contested in the last state polls.

SUPP is a component of Gabungan Parti Sarawak (GPS), the ruling coalition.

Asked which Pakatan party would contest in Piasau, Pujut and Senadin in the coming state polls, Dr Teo said the coalition, at the national level, would decide soon.

Dr Teo also announced the setting up of a counter at the PKR operations centre to handle Peka B40 health incentive applications for those with monthly household income of RM4,000 and below. 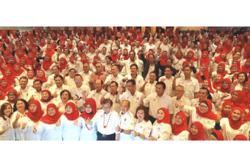