Outstanding: The Nestlé leadership team joining Aranols (centre) to kick off Peraduan Nestlé Gaji Seumur Hidup, offering Malaysians the chance of a lifetime to win a ‘Salary for Life’!

PETALING JAYA: Nestle Malaysia has announced its biggest countrywide contest called “Peraduan Nestle Gaji Seumur Hidup”, a contest in which two grand prize winners will win a “Salary for Life” of RM3,000 a month, among other notable prizes.

Nestle Malaysia chief executive officer Juan Aranols said the contest, which runs for 11 weeks beginning today, holds over RM4mil in the total value of prizes, which included weekly cash prizes of RM500 for 50 winners as well as a “Salary for a Year” of RM3,000 monthly for 10 lucky winners.

“This contest began in Spain in 1984 with Nestle and Nescafe and has been held annually ever since.

“The winnings from those allowed many to fulfil their dreams, such as bringing relief to struggling households or helping entrepreneurs start their own business with the safety of a regular income.

“Here, it is Nestle Malaysia’s biggest competition to date, and it is also our way of saying thank you for the heartfelt support Malaysia has given to Nestle and the Nestle brands for over 100 years, ” he said at the launch of the contest yesterday.

The event featured the broadcast of a video of a collection of people speaking about what they would do if they win the grand prize.

Aranols said: “This contest represents a form of extending the company’s appreciation to its Malaysian customers and its commitment in continuing to offer tasty and nutritious choices in support of healthy lifestyles.”

This is the first time Nestle Malaysia is holding such a competition in the country.

The contest mechanics are simple: shoppers and consumers simply need to purchase any Nestle product worth a minimum of RM15 from over 300 product variants from any of the 25 brands under the company’s portfolio that are participating in the contest – including Nescafe, Milo, Maggi, CoffeeMate, and Nestum – and obtain a receipt and subsequently post this proof of purchase or WhatsApp the photo of the receipt to a given number.

One receipt qualifies a person to one entry for the contest, but if a person purchases, for example, Nestle products worth RM100, that person can submit the receipt to qualify for multiple entries, subject to contest rules and conditions.

Consumers are allowed to submit as many entries as they wish.

The contest ends on April 30 with many participating retailers who provide official receipts as proof of purchase, including major supermarkets, hypermarkets, mini-markets, petrol marts, convenience stores as well as e-commerce platforms, including Lazada and Shopee, across Malaysia. Other participating “e-tailers” include Lelong, Presto, PGMall and Astro Go Shop.

Find out details about the contest at www.dearnestle.com.my/event-and-happening/peraduan-gaji-seumur-hidup 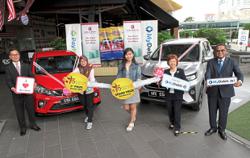 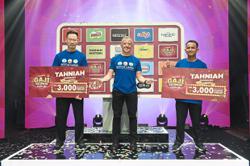 Contestants from Pahang and Selangor win ‘Salary for Life’