Defence counsel who is representing the first accused in the case, Samirah Muzaffar, Tan Sri Muhammad Shafee Abdullah said the article taken from mimpiari.blogspot.com, was believed to be Nazrin's sincere feelings for his brother Dr Abdul Aziz Hassan who was the 18th witness in the case.

He said among the content of the article written between 2004 and 2007 were feelings of disappointment by Nazrin for his brother who was described as a hero in the family.

"Mother passed away this year and each week before she died, mother asked when would he return her properties.

"In fact, two weeks before dying, she again raised the matter but she died without getting her desire fulfilled,” said Mohamad Shafee, when reading the article in the blog before Judge Datuk Ab Karim Ab Rahman on Thursday (Dec 26).

However, deputy public prosecutor Datuk Salim Soib @ Hamid protested that the article should not be read in court as it was not appropriate.

Nonetheless, Muhammad Shafee explained that he read the article to refer to Abdul Aziz’s statement in court that relations between him and the deceased were good when it was otherwise.

Yesterday, in his statement in court, Abdul Aziz described himself as a father to Nazrin as their father died when they were 22 and 12 years old respectively.

Abdul Aziz said they were close even though they seldom meet as Nazrin was busy with his career and his younger brother was a secretive person who was more interested in relating his problems with friends.

On May 12, former senior executive of Intellectual Property Corporation of Malaysia (MyIPO), Samirah, 44, who is the widow of Nazrin, 47 and two teenage sons aged 17 and 14 were jointly charged with Indonesian, Eka Wahyu Lestari who is still at large with murdering the man.

They were accused of committing the offence in a house at Mutiara Homes, Mutiara Damansara between 11.30 pm on June 13, 2018, and 4 am on June 14, 2018, under Section 302 of the Penal Code read together with Section 34 of the same code which provides for the mandatory death sentence upon conviction.

The trial will resume on Friday (Dec 27).- Bernama 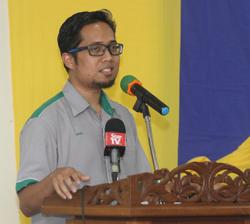