Two of the proposed stations would be located in Kuching and one each in Sri Aman, Sibu, Bintulu and Miri.

He said an integrated hydrogen production plant and refuelling station, touted to be the first in the South-East Asia, was commissioned in Kuching this year by Sarawak Energy Bhd (SEB) as a pilot research facility.

“As part of our research on the viability of this fuel of the future, we are currently testing three hydrogen buses on the road. These buses are under the ownership and management of Sarawak Economic Development Corporation, ” he said at the opening of the inaugural Sustainability and Renewable Energy Forum here on Tuesday. (Dec 10).

The two-day forum was organised by SEB and the Sarawak Utilities Ministry.

Abang Johari said the outcome of the research would guide Sarawak on the application of hydrogen and fuel cells in the future.

“This research is vital towards developing a ‘hydrogen economy’ for Sarawak.

“Sarawak provides an ideal setting for enabling the hydrogen economy, given our abundant hydropower resources which enable the production of clean hydrogen from source, ” he added.

Abang Johari also said the state would continue to reduce its reliance on fossil fuels and develop a modern and efficient public transport system with minimal impact on the environment.

Sarawak, he added, was looking into building smart cities with smart power grids to improve efficiency, sustainability and welfare of the people.

“All this requires energy, so it is inevitable that we achieve energy security first for this next phase of development to take shape, ” he said.

In line with this, he said Sarawak was pursuing a balanced and holistic energy development strategy to ensure energy security, sustainability and affordability.

“While we believe that environmental sustainability is crucial, energy affordability and security are key factors in how we develop our energy resources for the region and beyond.

“This means achieving a realistic balance by maintaining predominantly renewable hydropower in our generation mix with indigenous coal and gas for energy security, ” he said. 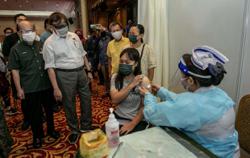