Face to face: All set for new duties 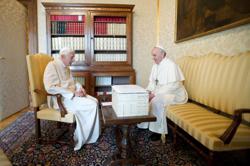 The Alabama native is a Catholic priest, but more than that, he is a career diplomat, having served the Vatican as its envoy in Asia, Africa, Europe and the Americas.

But his travelling days appear to be over now, with Malaysia as his last stop. Archbishop Marino, the first apostolic nuncio (ambassador) in Malaysia, a post he held since 2013, left with a heavy heart for Rome last Saturday.

He has now been promoted to president of the Pontifical Ecclesiastical Academy in Rome.

“I am excited over my new posting, but I leave many good friends that I have made in six-and-a-half years in this country, ” he said in a farewell interview with Sunday Star.

Describing Malaysia as a “remarkable country with beautiful people living together in peace and harmony”, Marino quoted Saint Pope John Paul II – “We can never be happy without one another, much less against one another”.

It was an apt summary of what the country meant to him.

He said that he found Malaysians to be gentle, kind, gracious, welcoming, caring and loving.

“And that is why, even though this is a beautiful, green country, I will miss the people most.”

It is a measure of Marino’s achievements while in this region that he has now been given an important position within the Vatican hierarchy – the academy is a school that trains ambassadors and churns out eight to nine new diplomats every year.

It should be noted that when Marino first set foot in this country, ties between the Vatican and Malaysia could best be described as lukewarm.

Diplomatic ties between Malaysia and the Holy See began in 2011 but the nunciature (embassy) was only set up in 2013 after the archbishop arrived for his posting.

“My instruction from the Vatican was to set up a permanent presence in KL because of the great importance of Malaysia in South East Asia. The Holy See viewed Malaysia’s multi-racial, multi-cultural and multi-religious make-up as very important.

“And the ministry especially, was extremely helpful in setting up the embassy and providing suggestions in terms of land, planning permission, and others, ” he said.

The 66-year travelled the length and breath of the country, including East Malaysia, visiting all the Catholic dioceses and hosting inter-religious dialogues. The relationship between the two countries improved and this is reflected in the decision by the Malaysian government to establish an embassy at the Vatican two years ago.

As an archbishop nuncio, Marino had two roles. One, as a representative of the Holy See in a typical diplomatic function, to act and function within the diplomatic community and two, as the Pope’s representative to the Christian community, especially Catholics.

And it is the Catholics who should be most grateful for Marino’s tenure here.

He built the first Vatican embassy, oversaw the appointments of four archbishops, was responsible for getting Malaysia its first cardinal in Anthony Soter Fernandez and obtained the title of minor basilica for St Anne’s church in Penang.

While serving in Malaysia, the archbishop, who has degrees in philosophy and psychology as well as theology, was also the nuncio for Timur Leste and the apostolic delegate for Brunei.

His flair with languages also held him in good stead when he was appointed Dean of the Diplomatic Corps.

“I didn’t earn this honour, ” he was quick to point out, adding that the dean was automatically the longest serving ambassador.

But what would he consider his biggest achievement during his stint here?

“I wouldn’t say achievement as such, more of my greatest satisfaction.

“It was the act of compassion by His Majesty the Sultan of Johor Sultan Ibrahim Ibni Almarhum Sultan Iskandar in commuting the death sentences of three Mexican brothers who were on death row for drug trafficking, ” he said.

On his appointment as president of the Pontifical Ecclesiastical Academy in Rome, Marino said he would be going back a full circle as he graduated from the same academy in 1988.

“I will oversee its operations, training the future diplomats of the Vatican, something the school has been doing since 1701, ” he said.

He is certainly in illustrious company as there have been five popes who were graduates from the academy over the years. The last was Pope Paul VI who was pope from 1963-1978.

Perhaps, in the not too distant future there could be another graduate from the academy who takes on St Peter’s mantle at the Holy See? Perhaps, someone who might have served as an ambassador to Malaysia?

Archbishop Marino, of course, laughed off such a notion as fanciful, but his parting advice to Malaysians evoked a rather papal-like touch, as he quoted the recent words of Pope Francis: 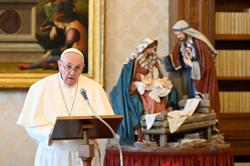