IN the past 10 years, no community leader dared to vie for the top post of Huazong (the Federation of Chinese Associations Malaysia) when it was under the leadership of steel businessman Tan Sri Pheng Yin Huah.

The key reason: Pheng was spearheading an ambitious project to build Huazong a grand RM100mil home to fulfil his 2009

Hence, whoever aimed to topple him must shoulder the uphill task of massive fund-raising that included knocking on the doors of tycoons to beg for support.

To allow more time for the well-connected Pheng to complete his pledged project, the original tenure of the presidency for him was extended to 10 years from six through a constitutional amendment of Huazong.

In 2016, Wisma Huazong stood magnificently along a highway in Seri Kembangan. The stately 12-storey building, described as the most magnificent architecture ever constructed by a Chinese association outside China, stands testimony to the ability and influence of a self-made businessman with little schooling.

But last Sunday, Pheng – an MCA member and supporter of former premier Datuk Seri Najib Razak – had to bid goodbye to the organisation under the provisions of Huazong’s constitution.

And for the first time in 10 years, the outgoing leader saw under his nose a non-compromising fight for presidency and deputy.

“All this while, I thought I had a very united team. But there were undercurrents. I was also saddened when some Huazong leaders came under a veiled attack by a candidate,” says 71-year old Pheng in an interview with Sunday Star. But to Pheng’s relief, the polls outcome was in favour of the group that would continue to champion Chinese education and culture, with a mega view on national issues.

The new president of Huazong is Tan Sri Goh Tian Chuan, the founder of listed Globaltec Formation Bhd and chairman of the Federation of Chinese Associations Sabah.

Cheng, deputy president of Huazong before the polls, was originally seen to have a strong chance due partly to his ability to build up a link with DAP’s secretary-general and Finance Minister Lim Guan Eng.

He managed to get a RM330,000 grant from Lim for the National Chinese Cultural Festival organised by his Kedah federation ahead the Huazong election.

However, Lim’s speech at the festival did not appear to help Cheng to obtain convincing support.

According to the Chinese media that covered the event in Alor Setar, the DAP strongman had said he expected Chinese associations to lean towards parties within the ruling Pakatan.

“This message is not only for non-governmental organisations, but also for the media,” he was quoted as saying.

In a way, the Huazong election on Sept 8 mirrored the predicament faced by major Chinese associations, which have to choose between showing support for the government and maintaining neutrality in politics.

In the case of prominent NGOs such as the Associated Chinese Chamber of Commerce and Industry of Malaysia, their official stand has always been to work closely with the government of the day to help chart national economic policies and resolve issues faced by businessmen.

But as a group and individuals, they do not voice their political stand.

Hence, even though some of their leaders are members of past ruling political parties, the ACCCIM has emerged unscathed after the May 2018 election shock. Its functions are well attended by government leaders.

But for Huazong, due to the open political stand made by Pheng at several occasions before the 2018 general election, Huazong has suffered caustic remarks from many Pakatan leaders – particularly from the DAP.

But to Pheng’s credit, he has continued to articulate the real issues facing the Chinese community and bring them to the attention of the current government.

Indeed, he succeeded in getting an audience with Prime Minister Tun Dr Mahathir Mohamad in January this year to present a memorandum on Chinese issues.

While Pheng has never denied his political leaning, he has often argued that his past close ties with the government and MCA had benefited Huazong and Chinese education.

Pheng managed to raise RM8mil from the Najib government for its building fund of Wisma Huazong, and via the help of MCA president Datuk Seri Dr Wee Ka Siong, the Education Ministry approved the setting up of a Chinese high school in Kuantan.

The MCA donated RM2mil to the construction of Menara Huazong.

While many may not agree with Pheng’s views – which he never imposed on others, his personal attributes have helped him to gain support for the Menara Huazong project.

Among the 50 tycoons who had proactively supported him was the late Tan Sri Yeoh Tiong Lay from the YTL Group. Apart from donating over RM5mil, he was instrumental in persuading other tycoons to cough up millions.

The change in government on May 9 last year was a big shock to Pheng and most Chinese associations, which like many others were convinced that the former Barisan Nasional government could never be toppled.

The Pakatan Harapan coalition led by Dr Mahathir ousted the government of Najib on May 9, 2018.

For Chinese associations that had built up close links with MCA leaders and former Cabinet ministers, this “change of sky” has forced them to rethink their strategies in dealing with DAP’s Chinese ministers.

For some community leaders, loyalty should switch to the current government leaders, but for others, it is best to be apolitical or low-profiled to avoid political revenge.

Deep down, there is this dilemma: while it is important for major guilds to build up a working link with DAP’s Chinese ministers, the notion of cutting total ties with close friends in the past regime seems cruel.

Indeed, something started brewing in Huazong soon after the May 9 election last year.

A committee member mooted a debate on whether Pheng should be removed via a vote of no-confidence due to his political stance.

However, this plan fizzled out as the support for Pheng was found to be too strong for him to be ousted. His contribution to Huazong and the community had killed the idea.

In fact, Huazong’s status has been lifted by Wisma Huazong. Before Pheng’s era, the voice of Huazong was not loudly registered.

With its facade resembling the Great Hall of the People in Beijing, Wisma Huazong is a symbol of unity among thousands of Chinese guilds, after all past opposing forces responded to the call to provide Huazong a home.

The building of Wisma Huazong also appealed to Chinese tycoons who were and are not involved in Chinese associations.

“Many donors feel that Malaysia needs a united voice to speak on Chinese issues and Huazong, which has always endorsed moderation in its approach, is the most suitable organisation to play this role,” Pheng explains.

The building now houses an impressive Chinese museum, which has become the latest popular cultural locale to understand the history of Chinese migrants and their contributions. Students, diplomats, academics, researchers and tourists are lining up to visit the museum.

And despite the setbacks in his steel business – notably the fall of Perwaja Steel and delisting of Kinsteel Bhd – Pheng has persevered to serve Huazong without begging for sympathy.

The calm leader has never uttered a complaint about Huazong taking up too much of his time.

His contribution to Huazong was placed on record in a special resolution at the annual general meeting last Sunday.

Pheng declares to Sunday Star: “I think I have retired honourably. My track record speaks for me. I am proud that the team led by me have built Wisma Huazong from zero. 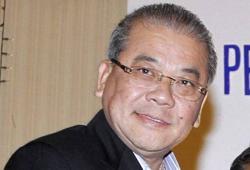