For the animals: Volunteers showing some of the toys for the animals at the Kok Lawi Wildlife Park in Kota Kinabalu.

KOTA KINABALU: Rescued animals at the Lok Kawi Wildlife Park were given new toys by volunteers from among AirAsia staff in seven countries and conservation group Animal Projects & Environment Education Sdn Bhd. Representative of the AirAsia team from its Allstars Do Good Unit, Achilles Sureen, said the programme was to help instil a sense of responsibility in staff members.

“We started this project on Saturday after getting the nod from the Sabah Wildlife Department, ” he said.

The two-day programme saw them using over 600kg of old fire hoses to make toys and equipment for the animals.

“Some of the items will be distributed to other animal sanctuaries, including the Sepilok Orangutan rehabilitation centre, ” said Sureen. The volunteers, he added, also repainted and refurbished some parts of the park to make it look more cheerful.

“It is useful when animals have more things to play with as they can explore more, ” he said.

Thanking the volunteers, Tuuga called on more non-governmental organisations to help contribute towards the enrichment of animals. The programme was organised by the People and Culture Department of AirAsia along with AirAsia Foundation, comprising staff from Malaysia, China, the Philippines, India, Indonesia, Thailand and Myanmar, as well as APE Malaysia and the Lok Kawi Wildlife Park.

AirAsia Foundation is the philanthropic arm of the AirAsia Group and funds social enterprises to help effect social change through entrepreneurship.

APE Malaysia is a social enterprise grantee of AirAsia Foundation.

Its mission is to improve animal welfare through behavioural enrichment where volunteers are engaged to create opportunities for wildlife to have meaningful interactions with their surroundings. 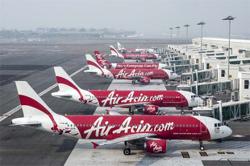