The Kuala Lumpur deputy police chief said the suspect, who works as a storekeeper and a security guard, was detained at an apartment in Bandar Sri Damansara at 2am on Saturday (Aug 17).

"He has been remanded until Tuesday (Aug 20).

"We are investigating the matter under Section 506 of the Penal Code for criminal intimidation, " he said.

DCP Roslan Bek also advised the public not to spread unverified news or make sensitive comments on social media that might stir racial unrest and disrupt the unity of people of various ethnic backgrounds.

Meanwhile, Syahredzan also tweeted his appreciation over the quick action by the police.

"I was informed that the suspect who threatened me has been arrested and remanded. Thank you, police, for their fast and professional action, " he tweeted.

He tweeted on Wednesday (Aug 14) night that the death threat was posted on Facebook.

“So I got this on FB. Not sure what powers he thinks I have, ” he posted via his Twitter handle @syahredzan.

He then lodged a police report on Thursday (Aug 15). 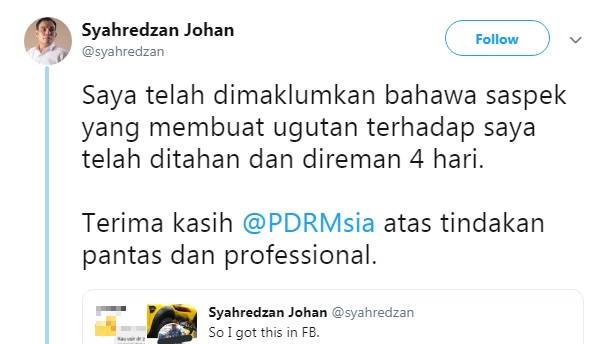 A screenshot of Syahredzan's tweet on learning a suspect had been arrested.