GEORGE TOWN: Popular restaurant chain Sri Anandha Bahwan closed all its restaurants Thursday (Aug 15) as a mark respect for owner V. Harikrishnan's wife, who was killed in an accident near Taiping.

Harikrishnan, 51, who was admitted at a private hospital here with a broken finger and face injuries following the accident is believed to be in stable condition.

His wife, K. Puvaneswary, 47, died on the spot when the Range Rover driven by Harikrishnan lost control at KM200.9 of the North-South Highway near Taiping at 3am Thursday and hit a tree on the side of the road.

The restaurant, which had its humble beginnings in a pre-war shophouse in Butterworth in 1980, presently has 17 outlets nationwide serving banana leaf cuisine and employing more than 500 workers.

His two sons, H. Veerasamy, 21, and H. Mehgulan, 17, who were in the vehicle suffered minor injuries and have been admitted to the the same hospital.

According to a police report made in Kerian, Perak, the vehicle was travelling towards Penang when the accident occurred.

Puvaneswary suffered serious head injuries and her body was sent to the Parit Buntar Hospital.

The report stated the cause of the accident as negligence and failure to control the vehicle. Ban people who drink and drive 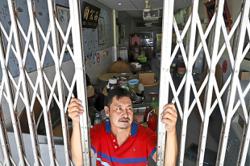