I dream of flying to London from KLIA in three hours, says PM

The Prime Minister said he was heartened by what KLIA has achieved so far, adding that KLIA was currently the 12th busiest international airport in the world.

"Who knows, (in future) we may be travelling in three hours to London?" said Dr Mahathir when asked what his dream for KLIA in the future was.

"In the context of human birthdays, 21 would be deemed to be the coming of age, but for KLIA, it is a testament of its sustainability and relevance.

"As an idea, it started off in the 1980s when we started facing problems with the Subang International Airport which, with its one runway, was bursting at the seams.

Subang Airport then was only operating with one runway with no room for expansion.

"It is amazing to witness the palm oil estate morphing into an airport of such beauty and ability to become an icon. It is an architectural wonder.

"I would like to take this opportunity to express my gratitude to everyone who made this idea or vision a reality, " said Dr Mahathir.

He also paid tribute to Kisho Kurokawa, the Japanese architect, behind the “Airport in the Forest, Forest in the Airport” concept.

KLIA, with its two terminals, was now connected to over a thousand destinations and as of 2018, had had 80 million passengers, said the Prime Minister while gracing the anniversary celebrations of KLIA here on Aug 13.

He said that the government was committed to promoting KLIA as the main doorway of tourism and equally committed to ensuring the growth of the aviation industry.

KLIA celebrated 21 years as the country’s leading gateway this year with the theme "KLIA Turns 21: A Precious Legacy". 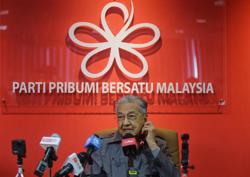