KUALA LUMPUR: Police will investigate the death of Benedict Thanilas while in police custody in 2017, says city police chief Comm Datuk Seri Mazlan Lazim (pic), following the testimony of an investigation officer (IO) during an inquest into the matter.

During the inquest held at the coroner's court on June 26, the case IO, Shahruddin Rajab, testified that the medical records and entry registration for the year 2017 had been disposed of.

The IO also said CCTV footage from June 26 to July 9, 2017 were no longer available at the Jinjang lock-up.

"He lodged a report about a testimony given by an investigation officer during the inquest.

"We will investigate further without jeopardising the inquest proceedings which are on going," he said in a statement on Saturday (June 29).

NGOs Suara Rakyat Malaysia (Suaram) and Eliminating Death and Abuse in Custody Together (Edict) allege that this was to compromise the evidence and against the Police Act 1967.

He was arrested under Section 3(1) and Section 6(1) of the Dangerous Drugs (Special Preventive Measures) Act 1985.

He had a history of health complications, which included high blood pressure and diabetes.

He was said to have suffered breathing difficulties before he was taken to the Kuala Lumpur Hospital on July 10, 2017 but died shortly after.

Comm Mazlan urged all parties to not make any statements that were baseless because it could jeopardise police investigations and the inquest proceedings.

He also urged anyone with information on the case to contact the police hotline at 03-2146 9999. 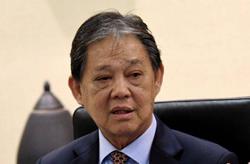