PETALING JAYA: Four individuals have been fined by the Sessions Court for owning and selling unauthorised communication equipment.

In the first case, Chen Kar Seng, who is the owner of Media Home Enterprise, was charged for owning 146 unauthorised android television boxes and AV senders.

“The case was investigated under the Communication and Multimedia (Technical Standards) 2000 Regulation and he had pleaded guilty and was fined RM40,000 by the court,” said Mohd Shafie.

“In the second case, MSB Technology (M) Sdn Bhd director Ow Kee Foo along with Hing Fook Young and Tan Kim Sia were fined RM30,000 after they pleaded guilty to selling seven units of unauthorised AV senders,” he said, adding that these were unauthorised and had used a wrong certification label.

“The case was also investigated under the same regulation and all of them had pleaded guilty,” Mohd Shafie.

They were fined a total of RM30,000, he said, adding that all the items were surrendered to the MCMC before being disposed of.

In a statement, Mohd Shafie also stressed that MCMC would continue with its operations to fight the use of unauthorised communication equipment nationwide.

“The members of the public have been reminded to purchase and use authorised equipment with MCMC labels.

“The reminder is to protect the safety of consumers and to avoid any disruption to other communication services,” he said.

Consumers are also urged to check the status of the equipment on the mobile application Check Your Label or via the website https://ecomm.sirim.my.

On Feb 4, The Star reported that MCMC and Domestic Trade and Consumer Affairs Ministry were cracking down on these unauthorised sites.

MCMC’s Network Security and Enforcement Sector chief officer Zulkarnain Mohd Yasin told The Star that many of the android boxes sold in the market were illegal and did not carry approval by Standard and Industrial Research Institute of Malaysia (Sirim) .

Local content industry players and film makers have called for Malaysia to ban media streaming boxes, including Dimsum chief marketing officer Lam Swee Kim, who said that “it’s not a matter of who will benefit

from this. The greater picture here is to stop piracy. It’s not that the streaming box is not good but the content passing through it is illegal”. 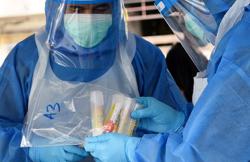