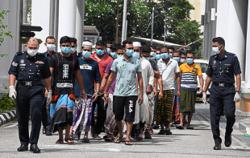 PKR vice-president Tian Chua posing for photograph during the ceramah at Desa Pandan last night. IZZRAFIQ ALIAS / The Star. May 1, 2018.

SUBANG JAYA: Dirty politics is an insult to the intelligence of the majority of Malaysians who voted in Pakatan Harapan hoping for a new Malaysia, says PKR vice-president Tian Chua (pic).

"PKR emerged because we want to see a brand new political culture. We reject scandals and conspiracies.

"If there are political disagreements, we already have democratic frameworks to decide on the leadership. To fight political rivals, it is not only an injury to the one attacked but an insult to all of us who rose to fight against corrupted political culture.

"We now see a new trend to go back to the dirty old ways, this is a betrayal of the trust of people have given us," said Tian, who is now attached with the Works Ministry.

He was speaking at the Hari Raya open house celebrations for the Sungai Buloh parliamentary constituency and Subang PKR here Sunday (June 23).

He was asked to comment on the recent viral sex video that had made its rounds.

PKR member Haziq Abdullah Abdul Aziz has been issued a show cause letter after he confessed to being one of the men in the sex video.

Haziq also alleged that the other man in the video was Economic Affairs Minister and PKR deputy president Datuk Seri Azmin Ali.

Azmin had stated that the video is "a nefarious plot" to kill off his political career.

Tian further said that the those behind such conspiracies such as the sex videos should be brought to book under the law.

"There must be legal actions taken against them, to state our stand that Malaysia no longer accepts such a culture.

"At the same time, I will urge Malaysians to rise above such mentality. This type of gossiping and rumour-mongering must be eradicated from our new Malaysia," said Tian Chua.