KUALA LANGAT: The sky opened up but it did not stop the people, some as young as 11, from taking part in a beach clean-up at Pantai Morib Baru under the state’s #plasticfree campaign.

“What I like about today is those who drove 1.5 hours in the heavy rain to clean our beach.

“Nothing stopped them or me. They are the real eco warriors as young as 11 years old living with zero waste. I have total respect for them,” said the princess during the event.

Tengku Zatashah said it was her first programme this year and hoped that such initiatives could be carried out on a regular basis.

The princess said she would also utilise social media such as the Clean Swell mobile application, which allows users to record each item of trash collected.

The information will then be channelled to a global Ocean Trash Index, said to be the world’s largest database of marine debris. 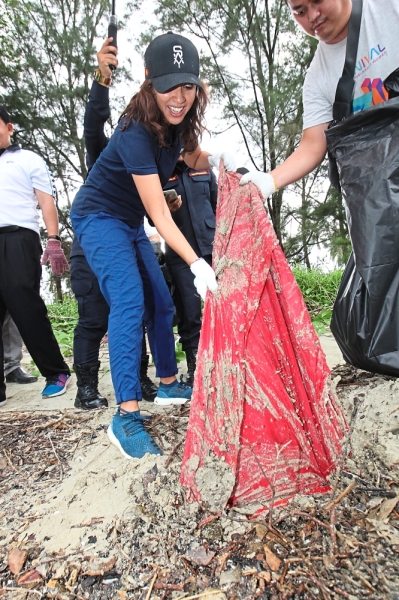 Helping hand: Tengku Zatashah helping to clean up Pantai Morib Baru. She said she was impressed that many came out to help despite the heavy rain.

“I’ve been using it since 2016. No matter how small the data but as long as you key it in, the information will be sent to ocean conservancy worldwide.

“It is important to collect data to understand ocean conservancy and what’s hitting our marine life,” she said.

A total of 779.8kg of rubbish was collected from the beach.

It also saw the planting of 100 Rhu or Casuarina Equisetifolia trees on the beach.

Tengku Zatashah is also #StandTogether ambassador in The Star’s R.AGE for national kindness week campaign at schools, royal patron to Make-A-Wish Malaysia and president of Alliance Française de Kuala Lumpur, for which she received France’s highest distinction of Chevalier de la Legion d’Honneur (Knight of the Legion of Honour).

At Adex Singapore 2019, Tengku Zatashah was awarded for her contribution to stop single-use plastic and reducing waste through her #sayno2plastic nationwide movement.

She continues to campaign and lobby on #sayno2plastic by organising beach, as well as dive clean-ups, and influencing the public in going green by changing their daily habits.

State Environment, Green Technology, Science and Consumer Affairs Committee chairman Hee Loy Sian said the programme was an ongoing campaign to reduce the use of plastic and to clean the environment.

“We want to send a message to the public on the importance to clean up beaches and to reduce plastic usage,” he said.