Videos are all 'cooked up', says Dr M

"This is done by people who have political agendas," said Dr Mahathir.

He added people were able to produce any kind of pictures they wanted to if they were clever enough to do it.

The event was also held in appreciation of his contributions to the party and nation.

Dr Mahathir said the videos were 'cooked-up' by someone with a political agenda.

"Things like these are dirty. If you cannot compete with someone don't do something like this," said Dr Mahathir.

To a question if Azmin had met him over the matter, Dr Mahathir said he (Azmin) had attended the weekly Cabinet meeting as usual on Tuesday. 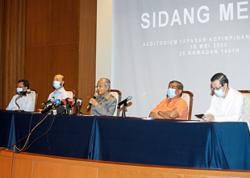