“This is because of safety concerns after the fire broke out at about 1.30am on Tuesday.

“The main structure may have been weakened and is no longer conducive for the traders to operate here. We hope the relocation can be finalised by this Friday,” he told a press conference at the site yesterday.

He said contributions – between RM3,000 and RM5,000 – would be given to affected traders this Friday to lessen their burden.

“The traders are supposed to be relocated to Lanai Seni, a three-storey complex in Jalan Tuanku Abdul Rahman, once it is completed,” Khalid said, adding that the building is still under tendering process but construction is expected to start this year.

The Jalan Melayu bazaar is part of Precinct 7 of the River of Life project that also involves the Dataran Merdeka stretch and Lorong Tuanku Abdul Rahman. 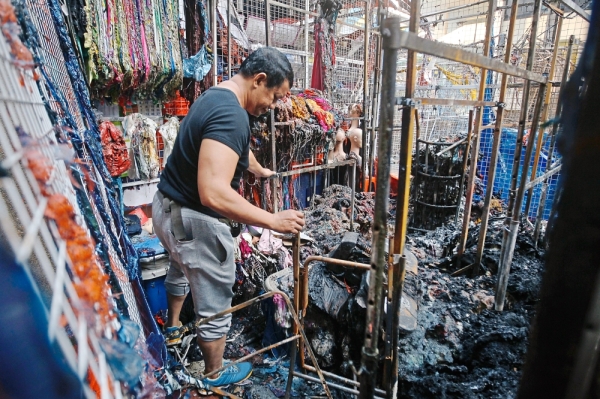 Since it was launched in 2004, the blue-and-green structure has been a subject of controversy as shoplot owners complained of their businesses being affected by traders who blocked their storefront.

It was built at a cost of RM10.2mil by Kuala Lumpur City Hall (DBKL) as part of the upgrading and beautification of the commercial hub.

A statement by DBKL yesterday said the bazaar traders might be temporarily relocated to Lorong Tuanku Abdul Rahman 3 and 5, if a majority of them agreed.

Kuala Lumpur mayor Datuk Nor Hisham Ahmad Dahlan has asked the affected traders to discuss their proposed temporary relocation plan with their association.

“In the meantime, the traders are not allowed to continue operations at the site until the Fire and Rescue Department completes its investigation. This is also to allow DBKL to conduct repair works,” the statement added.

Thirty out of 143 stalls, selling items like clothes, accessories and bags, were razed in the fire.

Some of the unaffected stalls were still operating yesterday.

Accessories seller Mohd Shukri Suhaimi, 42, who was staying in Citin Hotel located beside the bazaar, said he was woken up by the heat of the fire and saw several stall owners already at the scene.

“We tried to break down the metal hoarding surrounding the stalls but to no avail.

“There was no fire extinguisher around and we couldn’t help put out the flames,” he said.

Nuraina Najiran, 34, was saddened that it happened during the Ramadan period when “we get more customers”.

Surayati Hashim, 45, estimated her loss to be RM30,000 after her stall was completely destroyed.

“My legs were trembling when I heard about the fire and seeing the stall’s condition, I am beyond words,” she said.

Wisma Yakin Trade Association president Datuk Maideen Kadir Shah said this was the third fire there in the last 14 years.

“The bazaar is a fire hazard because of the poor electrical wiring.

“The area was not meant for a bazaar; it was a pedestrianised road, and in 2004, stalls were set up. The stalls operate round the clock daily,” he said.

Masjid India Business Owners Association president Datuk Ameer Ali Mydin said he was thankful that the Ramadan bazaar was relocated out of Jalan Masjid India, otherwise emergency service vehicles would have had difficulty getting into the site.

The association, he added, had also started a donation fund to assist the affected traders.

“The bazaar set-up was a firetrap and the traders were supposed to relocate to make way for the River of Life Phase Two project but no clear directive was given on when and where they were to move.

“Now, I hope things will move faster,” he said.

Meanwhile, Kuala Lumpur Fire and Rescue Department operations commander L. Logeswaran said the forensic report on the incident was expected to be ready by Friday, with the total losses to be known by then.