PETALING JAYA: A former telco CEO and local musician has been arrested by the police for allegedly trespassing his ex-wife’s house.

It was understood that the individual was arrested between 5.30pm and 7pm, after he was called in for questioning at the Hulu Kelang police station on Thursday (May 16).

A source close to the case said that the police were investigating the individual under Section 448 of the Penal Code, after he had trespassed into his ex-wife’s home and issued a death threat.

There have been violent outbursts from the individual, a father of three, where he had broken the front door of his ex-wife’s house, and began a verbal spat.

The ruckus ended after a security guard, who heard the commotion, intervened.

The individual has reportedly a history of drug and domestic abuse problems.

"Yes there is such a case. It was for trespassing," he said.

It is learnt that the individual is being remanded for four days by the police to assist investigations. 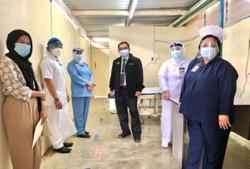