KOTA KINABALU: Professional divers in Semporna are concerned with the “lift bag” method used by certain researchers to tag turtles in waters off Mabul island.

“This method was used a few years back and, recently, we saw some researchers using the same method.

“One of us had taken part in the research work a few years ago and took a video of the process.

“The footage showed a group of divers taking turtles from the water to surface (to be tagged on the boat) using a lift bag,” he said in a statement.

The researchers were believed to be from local higher learning institutes. 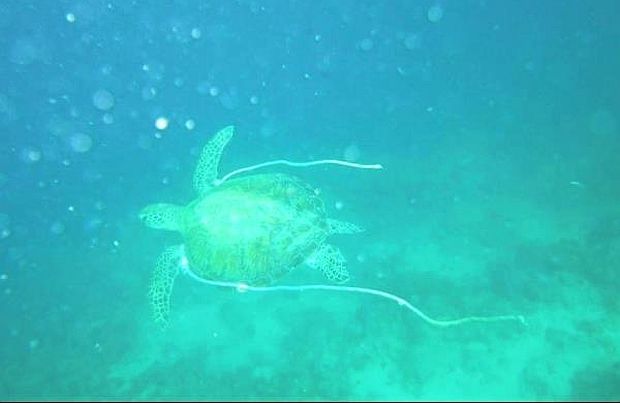 In a fix: A turtle photographed by a Semporna Professional Divers Association member off Mabul waters with a rope tied around its body.

Citing the concept of diving and resurfacing in humans, Dahlan said such a method where a person swims to the surface quickly without any break in between were life threatening due to the drastic change in the pressure to body functions.

“It could be the same for the turtles that are lifted out of the water in such a quick manner.

“Researchers should use suitable methods when dealing with sea creatures,” he added.

He said several dive masters and instructors in Mabul recently found dead turtles with ropes tied around them but were unsure whether they were related to research or illegal catching.

Dahlan also claimed that regular divers in Mabul had noticed that turtles in the area fear the presence of human beings.

“I have been diving in Mabul for almost 10 years and I, too, notice that turtles there are no longer as friendly to divers as they used to be.

“Researchers who do their studies at these areas twice a year might not be aware of behavioural changes of those turtles,” he said, urging the authorities to look into the matter.