Bung Moktar, wife held for alleged corruption, expected to be charged on May 3

His wife, actress Zizie Izette A. Samad, was also picked up.

Sources said Bung Moktar was arrested at 10.50am Wednesday (May 1) while his wife was detained at 11.15am.

The two were held after they were called in to have their statements recorded at the Sabah Malaysian Anti-Corruption Commission (MACC) office.

"We are looking into claims of graft involving several millions when he was heading a government agency," said an MACC source.

Bung Moktar was chairman of Felcra during Barisan Nasional's administration.

Bung Moktar, 59, and Zizie Izette, 41, were released a few hours later after their statements were recorded.

Sources said the two are expected to be charged at the Kuala Lumpur Sessions Court on Friday (May 3).

Bung Moktar vows no seat will be left uncontested Bung Moktar and wife's corruption trial to commence on May 14 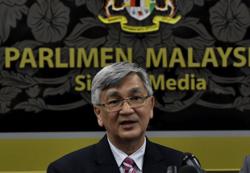