Warning: Brace for jellyfish attack in May

arine mystery: Dr Tan says that jellyfish blooms are still not fully understood, though they may be triggered by warming sea temperatures

GEORGE TOWN: Malaysia is heading for a potentially serious jellyfish bloom next month thanks to the heat and humidity of this year’s inter-monsoon period.

Centre for Marine and Coastal Studies (Cemacs) director Prof Datuk Dr Aileen Tan Shau Hwai says the bloom is expected to occur in many parts of the Straits of Malacca, especially near coastal urban centres such as Penang.

On top of making swimming at sea a nightmare, Dr Tan said the congregation of thousands of jellyfish would kill fish stock penned in floating aquaculture cages, clog fishermen’s nets and sting them when they retrieve their nets, and block water intake pipes at coastal power plants.

“Jellyfish blooms are still not fully understood but we do know they may be triggered by warming sea temperatures,” she said.

Dr Tan said that last year, there was a spike in jellyfish population in March and it peaked in April and May, declining again in June.

She predicts that next month would see a repeat of the phenomenon, adding that Sabah’s coastal waters were showing signs of an invasion.

“When the dissolved oxygen levels are low, you have dead zones with little fish and other marine life and there, jellyfish polyps will thrive and multiply rapidly,” she said.

This year’s weather patterns, she said, are expected to exacerbate the low oxygen problems at sea.

She said last May’s study showed that during neap tides, when the coastal sea levels between the high and low tides were only about 50cm, the number of jellyfish found crammed near Penang’s shorelines was almost double.

Besides warning the public against swimming at popular beaches and telling fishermen to be mindful, Dr Tan said “there is nothing much we can do”.

“This is everyone’s problem. You can’t blame the government or expect the authorities to fix it.

“It takes the cooperation of governments, academicians, industry leaders and everyone in our community to stop polluting the environment,” she said.

She gave the jellyfish warning after attending the launching of the Marine Plastic Pollution Exhibition at Shangri-La’s Rasa Sayang Resort and Spa in Batu Ferringhi.

The resort commissioned local artists Tan Lay Heong, Lee Cheah Ni, Lee Kwai Han and Tan Wah Chew to use plastic waste to depict how every bit of plastic made since the synthetic material was invented in the early 1900s still exists as micro particles and poses severe pollution problems at sea.

Dr Tan said when micro plastics at sea break down further into nano size, humans would face health risks because the particles would be small enough to pass through the gastrointestinal tract and spread to the rest of the body.

“From jellyfish to plastic waste, we are damaging our seas beyond belief and someday, the damage will come back and hurt us,” she said. 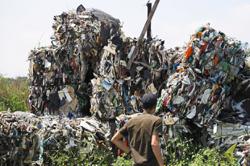