KOTA KINABALU: Former chief minister Tan Sri Musa Aman, who turned up at the Sabah State Assembly sitting for the first time in 11 months after being ousted from office on May 11 last year, asked a few questions and left after question hour.

He later asked Infrastructure Development Minister Datuk Peter Anthony if the planned railway line between Kota Kinabalu and Kudat was just to raise people’s hope in view of the high costs.

He asked whether these were just “cakap angin” (empty talk) that could not be realised.

Both Shafie and Peter answered the supplementary questions from Musa, who was sometimes seen smiling and sometimes pensive as he looked on from the opposition bench. 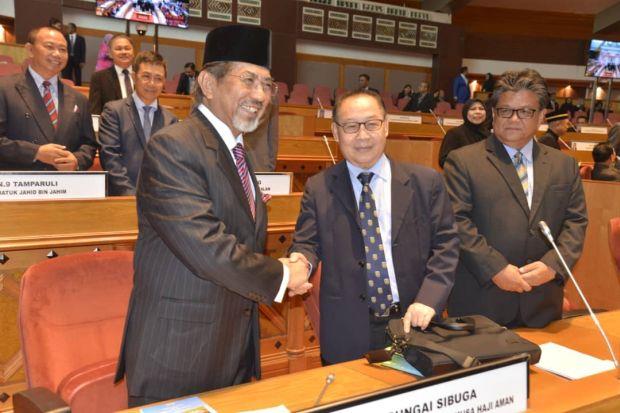 As he walked out of the assembly hall after question hour, Musa did not want to field any questions from reporters.

“I will speak when I am ready,” he said when asked if he was taking over as opposition leader in the assembly from Star Sabah president Datuk Dr Jeffrey Kitingan.

Earlier during the assembly sitting, Dr Jeffrey welcomed Musa as the state opposition leader just before he asked his question.

Since the May 9 general election last year, Musa had not turned up for a single assembly session.

He only came to the state assembly building once in September to take his oath as Sungai Sibuga assemblyman.

Musa, who faces multiple money-laundering charges in connection to timber deals that allegedly occurred during his tenure as Sabah chief minister, has maintained a low profile since the election.

He could have lost his seat had he failed to turn up for three successive sittings.