Niosh: Worrying hike in commuting accidents, most of them m-cycle related

KUALA LUMPUR (Bernama): The main issue confronting occupational safety and health in Malaysia is the rising trend of work-related commuting accidents, according to the National Institute of Occupational Safety and Health (Niosh).

Its chairman Tan Sri Lee Lam Thye said the situation has become increasingly serious and the nation was concerned about it.

“On average, two workers are killed in accidents daily whilst commuting to and from the workplace. Sadly, most of the victims are motorcyclists,” he told Bernama recently.

According to Social Security Organisation (Socso) statistics, there were 35,195 commuting accidents in 2018, equivalent to 48% of the total 72,631 occupational safety and health-related accidents reported that year.

A study carried out by Socso and a local public university revealed that in general, about 76.9% of commuting accidents involved motorcyclists and their pillion passengers.

Statistics showing an upward trend in deaths due to commuting accidents, in comparison to deaths caused by other industry-related factors, was also a cause for concern, said Lee, adding that the issue has to be addressed quickly.

In 2018, for instance, commuting accidents led to 666 deaths while other work-related deaths totalled 222.

“Earlier studies have also shown that 52% of commuting accidents occurred within 5km of the destination,” said Lee, adding that most of the mishaps occurred at peak hours in the morning when the victims were rushing to work.

“Some of them may have had to send their children to school first or buy some food for breakfast before rushing to their office.

“They were probably speeding to reach their workplace on time, with no regard to their safety.”

The use of mobile phones while driving or riding has also been identified as a major cause of road accidents in this country.

A 2016 study by the Malaysian Institute of Road Safety Research (Miros) involving 300 motorists showed that 43.4% of them used their phones while driving and 61.9% used it while waiting at a traffic lights junction.

“Sometimes, we can’t blame the employees for using their phone while driving or riding to work because they have to answer a phone call or read a message from their office head.

“There are still many employers who are not concerned about the safety of their employees and keep sending them messages even when they are driving or riding.

“The employees, on their part, feel they have to respond to the messages immediately to avoid receiving a reprimand,” said Lee.

He said when the workers concerned were the main breadwinners, their families would suffer while Socso's expenditure would spiral as the agency would have to pay out compensation and benefits to the victims' heirs.

In 2018, Socso spent an estimated RM600mil to RM800mil in compensation payouts related to deaths caused by commuting accidents.

“It is worrying when many workers get killed in road accidents.

“Our country is on the verge of attaining advanced nation status, so we cannot afford to lose our skilled employees,” said Marin, adding that a study conducted by Socso and a public university revealed that 65% of commuting accidents involved workers below the age of 40, with 80% of them being male.

He also said that Socso has implemented various programmes, including collaborating with the police and Miros, to enhance workplace safety and health awareness among its contributors. – Bernama

Danger on the road to work 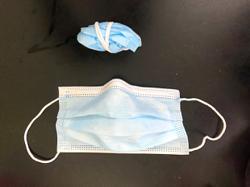 Safe way to dispose of masks