A screengrab of one of the video.

The students were demonstrating across the street of a restaurant near Universiti Malaya where Najib was speaking.

A video of the scuffle that is being shared on social media showed Najib's supporters, including Umno supreme council member Datuk Lokman Noor Adam, accosting the students who were behind a railing.

The students were holding placards that read “Najib tak malu (Najib is shameless)” and “Mana RM2.6bil? (Where is the RM2.6bil?)”, as well as a big cut-out of a caricature of the former premier as a clown.

Najib's supporters climbed over the railing and started shouting at the students.

The confrontation quickly turned aggressive as the supporters snatched the placards away from the students.

Lokman allegedly grabbed and tore the clown caricature into pieces.

Najib’s supporters then held one of the students in a reverse chokehold and grabbed his hair and hit him.

Several men were seen calling “sabar (patience)” and separated the two groups before the students retreated.

According to Malaysiakini, the manhandled student has been identified as Universiti Malaya Association of New Youth (Umany) president Wong Yan Ke.

It reported that the police took the students in their vehicles to the Pantai Dalam police station.

Lokman reportedly accused the students of provoking them.

“I don't care if they protest, but when they use a picture of Najib, that is our boss. It is our right to take that picture and tear it,” he told Malaysiakini. 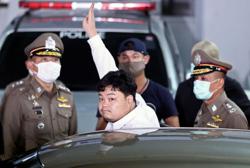 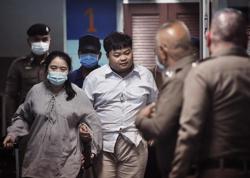