The tram system, as part of the townships green transportation features, servicing its key commercial districts within Gamuda Cove.

TOWN-MAKER Gamuda Land has mindfully planned and designed homes amidst lush tropical-inspired landscapes for its first community in Gamuda Cove.

Inspired by its neighbours Paya Indah Wetlands and the Kuala Langat Forest Reserve, Gamuda Cove is planned as a “nature sanctuary, smart city” which is the embodiment of Gamuda Land’s value to “build with respect to nature” yet planned to be “a town that stands the test of time”.

With careful integration of nature, amenities, security and connectivity, the township creates a wholesome living environment for its future residents.

Sitting on a 19ha-plot that gives a sense of beach resort living, Palma Sands features 490 double-storey terrace with modern architecture amidst greeneries and landscaping that extends to the 24ha-Central Park – enabling future residents to enjoy a serene living environment.

Designed to accommodate diverse family needs and lifestyles, the units comes in four layout type and built-up areas ranging from 1,824sqft to 2,620sqft, priced from RM650,000.

Most of the units’ bedrooms are planned with ensuite bathroom, a feature that many look for in a modern home. 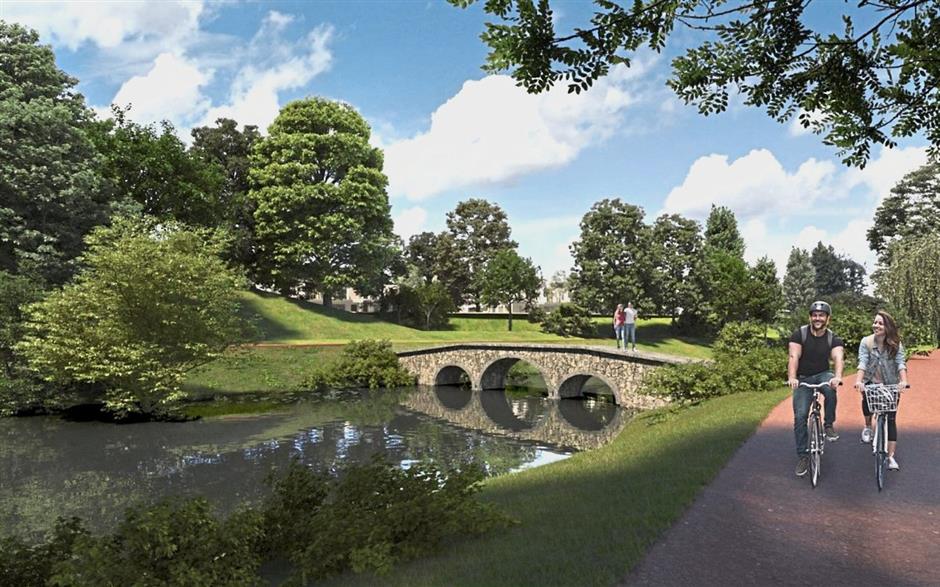 To take advantage of the vast Central Park adjacent to Palma Sands, some of the 22’ x 75’ units are designed with dual frontage and a balcony attached to the back room for residents to enjoy a view of Mother Nature.

Homeowners can have peace of mind with security and safety aspects thoughtfully planned into the nature-themed project.

The gated-and-guarded community is equipped with security features such as 24-hour closed-circuit television cameras as well as the adoption of the crime prevention through environmental design (CPTED) model.

With CPTED, a signature feature in all Gamuda Land’s township, children will be safe to roam the streets with natural buffers between pedestrian pathway and driveway, effectively segregating pedestrians from moving vehicles.

“What is unique about Gamuda Land’s projects is that we carefully think through all the details and components that make a good town,” said Gamuda Land project director Aw Sei Cheh.

“When we create a place or town, we think through the roads and connectivity including all the neighbourhood stops in between. We think also of virtual connectivity so that our community can remain connected to the rest of the world.

“We not only think of the home place, but also the park place, play place, work place, learning place, shopping place and eating place.

“When all of these right components come together harmoniously, the town works,” said Aw, adding that with the town-making principles done right, Gamuda Land is confident that Palma Sands will be well-received in the market.

All 198 units previewed last September have been taken up. With the positive response, the remaining units at Palma Sands will be launched this weekend at Gamuda Cove Experience Gallery in USJ Taipan, Selangor.

Palma Sands is slated for completion in 2021.

Just like in every project, Gamuda Cove is comprehensively masterplanned, underpinned by good location and well-crafted environment that balances the natural surroundings with extensive facilities.

“Gamuda Cove is built with respect to nature as the land is blessed with gazetted forest reserves and wetlands as its neighbours – Paya Indah Wetlands and Kuala Langat Forest Reserve,” said Aw.

“So, we want to be sensitive to these peripheral forest reserves and wetlands as we integrate our parklands and greens into our neighbourhoods.

“The central theme at Gamuda Cove is water in the form of lakes with wetland fringes surrounded by belts of indigenous woodland set within broad areas of open waterside meadows.

“The plants in these wetland and forest environments will grow and mature to support an increasingly broad range of flora and fauna that will enhance the overall level of biodiversity within Gamuda Cove.

“When these species come to our parks, it is testament that the ecosystem in our township is healthy and thriving for all living things,” he said.

Mindfully planned around four development pillars of being a nature-inspired sanctuary, smart sustainable city, tourism and entertainment centre, and nucleus of southern Klang Valley, Gamuda Cove is a self-sustainable township and commercial development with green transportation and emphasis on landscaping and water feature elements.

Smart elements such as high-speed telecommunications amenities, smart parking feature using gadget to identify parking spaces as well as smart security systems to create a safe and conducive haven within the township are included in the masterplan.

The development is also planned with a tram system, connecting the key nodes of the commercial zones.

“We also invested upfront on connectivity based on a transport masterplan. A direct interchange from Elite Highway is currently being constructed and is expected to be completed by the middle of this year while flyovers connecting Cyberjaya are planned for future development to enhance connectivity,” said Aw.

The 150.5ha-commercial space is dedicated to a variety of exciting experiences such as shopping, dining and outdoor recreational activities including a Discovery Park which will be the first tourism spot to open this year.

Next in the pipeline would be the water theme park. It will be the nearest water theme park to KLIA upon its opening in 2022 and expected to draw more international and local tourists to Gamuda Cove.

The entire township development is expected to be completed in 2038.

To know more about the development, join the official launch event of Palma Sands tomorrow (Feb 24) at Gamuda Cove Experience Gallery in USJ Taipan, Subang Jaya, Selangor (10am onwards) and enjoy an Oriental CNY open house with the Penang Food Fest specially prepared for visitors at the launch.

For those who are eyeing high-rise resort style living or investment opportunities within this self-sustained township, be the first to preview Gamuda Cove’s first serviced apartment development, Maya Bay Residences, which will be unveiled during the launch. Call 012-918 1288 for more info.