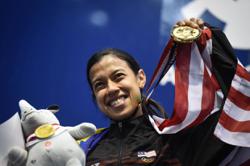 GEORGE TOWN: Desmond David and Ann Marie David, both 72, still feel the rush of excitement, and worry, each time their daughter Nicol has a game.

“My heart palpitates when she is on the court. We are excited for her, but want her to be safe as well.

“When we watch a game, it is still tense even now after all these years.

“We always joke about how much longer our hearts can take it!” said Ann, a retired teacher, during an interview at the Nicol David Inter­national Squash Centre in Bukit Dumbar yesterday.

Ann said it was their older two daughters who started playing squash but decided it was not something they wanted to pursue.

“Nicol used to follow her sisters for practice. She was hyperactive, running around the court even at the age of five.

“So the coach suggested we get her started too. She would stand in a corner with her modified racquet, too small for the normal ones, and practised on her own,” she added.

Desmond, a retired engineer, said they were thankful Nicol was able to live her dream and also grateful that she did not have any major injuries during her time, “as squash is a brutal game”.

“She gave it her all. When you come to her age in any sport, you probably have given it every­thing.

“I suppose after over 20 years, you would be looking at it as a time to retire,” he said.

He said that, initially, like a lot of parents, they thought studies were more important.

“Nicol excelled in school, so we thought it could be put on hold for a while.

“After her success over the years, I think the education she has had travelling the world and meeting people is something she could not have received from any university,” he added.

Desmond, a former Penang and national football goalkeeper, said they knew that her time to retire would come.

“Now she has more time and we are happy she will be able to give what has been given to her,” he said.

On Nicol being voted by fans as the greatest squash player of all time in the women’s category in a poll conducted in 2018 by the Professional Squash Association (PSA), Desmond and Ann said the family was humbled by it.

“No matter how difficult it was in the morning, she forced herself to get up and go through the routines.

“It helped her become who she is today,” said Ann.

You are the best

Beng Hee: Nicol showcased her potential at the tender age of 12

‘She had early signs of greatness’

Queen of squash to call it a day 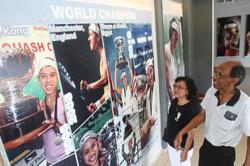