Minister: NRW rate must be reduced

KUANTAN: The government aims to reduce the rate of non-revenue water (NRW) to 31% by 2020.

The national average for NRW is 35% and one way to reduce this is the mass replacement of pipes, said Water, Land and Natural Resources Minister Dr Xavier Jayakumar.

In 2017, an average of 5,929 million litres of treated water – more than enough to sustain the water demand in Selangor and Johor – was lost nationwide a day.

“One of the main causes of NRW is asbestos cement (AC) type pipes, which are still prevalent in the distribution system at nearly 27% or 41,560km, according to 2017 statistics. These pipes rupture easily.

“The rate of NRW in Pahang is also high at 48%, even though AC pipe usage is only 26%,” he said after opening the Molecor (SEA) Sdn Bhd manufacturing plant in Gebeng here yesterday.

Dr Xavier said he had been informed that oriented unplasticised polyvinyl chloride (PVC-O) pipes were more suitable for the existing water supply system as it was cost effective, could minimise leakages and had longer durability.

“Up to 450km of PVC-O pipes have been installed in 10 states involving water operators such as Ranhill SAJ, Syarikat Air Negeri Sembilan, Pengurusan Air Sela­ngor and Air Kelantan Sdn Bhd,” he said.

He added that the government welcomed the involvement of private companies like Molecor in helping to reduce NRW through the production of PVC-O pipes.

“We are using the open tender process for all water services. Molecor (SEA) is welcome to take part in the process.

“It is up to each state and water supply company to select,” said Dr Xavier.

Molecor (SEA) has operated in Gebeng since 2015 with Molecor Tecnologia Spain as its principal and technology partner. 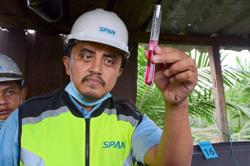 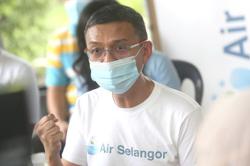 Tighter CMCO SOPs to be imposed in Sarawak
Covid-19: Several localities in Johor and Pahang under EMCO from May 8-21
Penang tethers on the brink of another MCO with spike in cases
Malaysians in India to be flown back due to surge in Covid-19 cases there, says Hisham
Najib compounded RM3,000, chicken rice shop RM10,000 for SOP violations
Covid-19: Another 3,551 cases recorded, Selangor figures stay above 1,000
Covid-19: Vaccination programme on track, no delays expected, says Adham Baba
S'wak's rural folk to have easier access to banking services following launch of mobile bank initiative
Khairy: Second round of AstraZeneca opt-in details to be released next week
Najib's SRC trial to extend until March and April 2022