Pin the ‘sex perps’ in the city

With the SafeCity app, the public can help map the prevalence of sexual harassment throughout Malaysia, so that apt actions can be taken to remedy the problem.

How many times have you read complaints and warnings like these on social media?

Most of the time these messages are simply ignored or forwarded and forgotten – until tragedy strikes.

“From the social media postings you can see that many women have experienced some sort of sexual harassment in public spaces – they have been groped, leered at, catcalled, touched, had people expose themselves to them. But 80% of these incidents in Malaysia are not reported to the authorities,” says social change advocate Radziah Radzi.

“This makes it difficult for us to gauge how prevalent sexual harassment is in the country and to find the right and effective local solutions,” adds Radziah, who is the president of non-profit group, Sisterhood Alliance.

So to make sure victims of sexual harassment and assault lodge reports of their experience, Sisterhood Alliance and fellow NGO, ENGENDER Consultancy, are working with the Women, Family and Community Development Ministry to introduce nationwide a free, crowdsourced mapping app: SafeCity Malaysia.

The initiative is supported by the National Council of Women’s Organisations Malaysia.

Created in India after a 23-year-old medical student was brutally gang-raped and murdered on a moving bus in New Delhi in 2012, SafeCity is a global platform that uses a data collection and visualisation tool to document sexual harassment and sexual assault in public spaces.

It is an initiative of the global non-profit Red Dot Foundation, which supports work on stopping sexual violence around the world. SafeCity launched a custom-made iOS and Android app in 2017, and was tried out in Malaysia last year.

SafeCity provides a safe space for people to anonymously document their experience of sexual harassment. By collecting users’ stories, SafeCity can map “harassment-prone” spots, which will allow authorities and enforcement agencies to identify the prevalence of sexual harassment and factors that trigger violence towards women – which in turn will help them find solutions.

Women and the vulnerable can use the app to avoid areas that may be dangerous or take extra precautions in such areas for their safety.

The app comes with an emergency button that allows users to key in their emergency contact numbers. They can also lock in the nearest police stations and other enforcement agencies on their digital map.

According to UN Women, one in three women has faced some kind of sexual assault at least once in their lifetime.

The effects of an attack on an individual go beyond the physical and psychological toll, says the UN agency. Harassment and fear of violence not only impedes the free movement of girls and women, but it can also stop them from reaching their full potential socially and economically.

This is the tip of the iceberg, notes Engender managing director, Omna Sreeni-Ong. 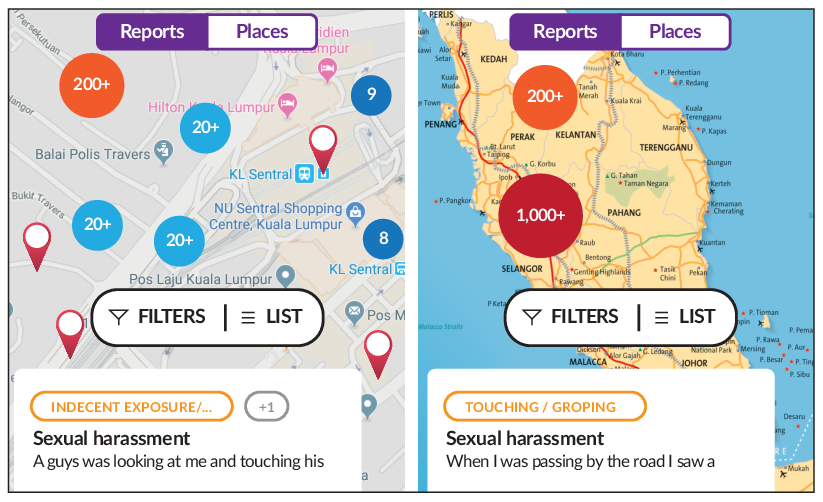 “Going by the UN’s estimate, I believe if I throw a stone, it will fall on someone – woman or man – who has experienced some kind of sexual violation. It can happen with someone just giving you an inappropriate look or going very close to you in a public space or indecent touching and groping.

“But many don’t report it. Why? Some think it’s just a normal part of life or a small matter and not a crime. Others worry that they will not be believed and will be blamed, ‘How to prove, the guy lari already?’

“Many are too embarrassed and scared of the stigma or think that it’s no use to report. There must be a safe space that women and men can go to make a report on sexual harassment. Only then can we create safe spaces for them,” says Ong.

With SafeCity, victims can make reports anonymously without any hassle or stress.

“It’s free and there are no in-app purchases. It’s also user friendly. All you need is a smartphone. When you make a report, there is no waiting and you will not be passed around from one officer to another or talked down to,” she adds.

Crucially, SafeCity can help aggregate data on sexual harassment to provide a more accurate picture of the situation in the country.

“The report will go to a depository that will be managed by Sisterhood Alliance and we will aggregate the data to identify ‘hotspots’ and map the prevalence of sexual harassment in the country.

“The data is powerful because it will allow us not just to talk to the government at the federal level, but also governments at the state level, as well as local councils, resident associations, business owners, enforcement agencies and even university administrations ... anywhere in Malaysia.”

Radziah concurs, adding that when they get at least 10 complaints at the same location, they will act promptly “by meeting the local councils, resident associations, building management, business owners or enforcement agencies to talk about what we can do to make the place safer”.

Last month, at a joint forum on sexual harassment and violence against women organised by the Women, Family and Community Development Ministry and the United Nations Population Fund, deputy minister Hannah Yeoh highlighted how the SafeCity app could help the government collect data on the number of harassment cases throughout the country.

Noting that sexual harassment is one of the most pervasive but underreported forms of violence against women, Yeoh said that many victims want to remain anonymous and commended the idea of creating a safe space for reporting sexual harassment.

The ministry is currently wrapping up its three-month impact study on sexual harassment, after which a draft of the Sexual Harassment Act will be finalised and presented in Parliament.

Recently, Yeoh reiterated to Sunday Star that the SafeCity app will allow the ministry to use the data collected and aggregated to come up with the right and specific measures to address sexual harassment in the country.

“The app will give us a clearer picture of the trend and prevalence of sexual harassment throughout the country. And when many use it, the data will be relevant for women NGOs and our ministry to formulate the necessary laws.”

Radziah agrees that insights from SafeCity will be valuable in helping the government and authorities understand the problem better and find the most effective actions to curb sexual harassment.

“The ‘stories’ can be aggregated to bridge the data gap and help in the formulation of policies and legislations,” says Radziah. “Sometimes the action needed can just be more police patrolling, more streetlights or community awareness.”

To business proprietors and property owners or developers who are concerned that SafeCity will give them a bad name or affect their businesses, Radziah says they should instead take a positive view and see this as a way to push their brand as caring and safe.

Ong agrees. “It’s better for businesses to be proactive and make their premises safe for women. This will draw in more people to patronise their premises or buy from them; like the malls that took action to make their car parks safer after complaints of sexual assault from female patrons,” says Ong, stressing that we shouldn’t wait for a tragedy – like the Canny Ong abduction, rape and murder case in 2003 – to occur, before taking safety measures.

She also refutes views that SafeCity’s mapping will give Malaysia a bad name globally.

“If you go online, you can see many questions from travellers, especially women travellers, about Malaysia’s safety level. Everyone knows there is risk everywhere, and what an app like SafeCity can do is to empower travellers with information about where is safe and how to keep safe,” she says.

For those who are concerned about the app’s location tracking, Radziah assures that the data on the app is protected. She also says that SafeCity will protect people from fake reports or vengeful shaming.

“With the app, the complainant should only describe what happened and insert a pin location, video and pictures and other information. The data will be moderated by Sisterhood Alliance and anything that we find doubtful, we will not put up without checking,” says Radziah.

“It’s all location-based and the reports made are anonymous. You don’t have to give your name or personal details unless you are reaching out for help. Then we will reach out to you.”

Echoing Radziah, Ong reiterates, “The purpose and objective of SafeCity is to map the prevalence of sexual harassment in the country so that we can take constructive action.”

According to Radziah and Ong, the Women, Family and Community Development Ministry will launch the app soon, but for now, the SafeCity Malaysia team aims to increase awareness about the app and encourage more women to download it.

“Don’t wait for something to happen. Just download the SafeCity app and park it in your phone.

“Who knows when you might need it,” says Ong.