VIRTUAL Reality (VR) is the latest addition to the customer engagement experience that is gaining popularity in most countries.

To enable the Malaysians share its fun, thrilling and amazing experience in the VR, software game developer VAR LIVE have introduced the largest VR theme park in Malaysia.

Located at the Level Two of the MyTown Shopping Centre in Jalan Cochrane, the theme park - VAR LIVE Malaysia - spanning across 929sq m is set to change the gaming world.

Themed “Dream With Your Eyes Open, it promises 13 VR attractions and 14 game rooms, from shooting games and haunting rooms to a virtual world finding historical remains and ancient treasures.

Currently, it is offering seven games for a start - variations in shooting for Zombie Jail 1 and 2, City Hero, Wildling War and Over Kill while promoting teamwork and interactive experience in a haunted cabin (The Others) and enjoying the fascinating car racing (Crazy Rush). 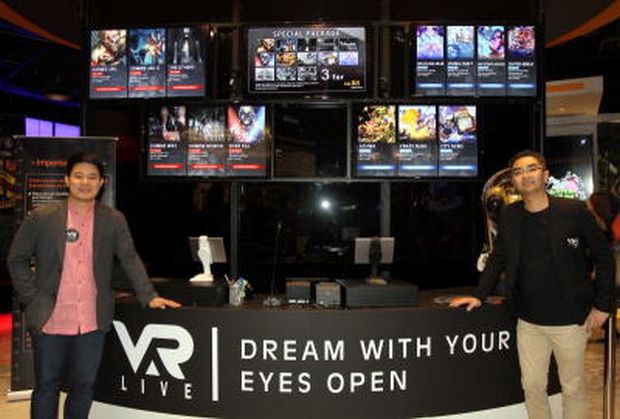 “VR is about turning impossible to reality. We develop our games on our own to attract the interest of all types of people, irrespective of age and gender,” he told The Star.

He pointed out that more games were developed for the outlet here compared to other spots abroad.

“VR games will last forever. The people love the heights, adventure, space, dinosaurs, and you can develop games on any topics,” he pointed out.

Ngu shared his goal of wanting to be one of the key persons who can contribute to the changing of the entertainment world.

In addition, Ngu said that they are also planning to involve in VR training next year relating to military, police, hospital, fire brigade, education and other services as required by their clients.

“We work closely with our research team in Taiwan to customise services according to their requirement.

“If the police need to train what to do if five people attack one person at the same time, it can be done in the interactive computer-generated experience taking place within a simulated environment,” he shared.

In elaborating, Ngu said that they have trained a department’s officers in Hong Kong to face conditions such as riots.

Besides that, Ngu said that they are also planning to set up similar outlets in major cities, such as in Kota Kinabalu and Johor, in stages.

“We are also planning to have a VR outlet in Singapore in June next year,” he said.

So far, he said that they have 14 VR outlets offering similar games such as in Japan, Taiwan, Philippines, China and Pakistan,

At the launch event, Ngu said, “I hope everyone will get a chance to try VR,” adding that the outlet was an example of “Malaysia Boleh” slogan.

VAR LIVE (M) Sdn Bhd executive director YL Lee said that they are planning to produce between three and four new games every year to attract new audience at the outlet.

“Our local research team gets overwhelming response over the games at the outlet during a pilot study here,” he said.

Lee said that they are also targetting to launch one of the biggest VR e-sports in March next year.

“We want to turn certain sporting activities to virtual experience,” he said. 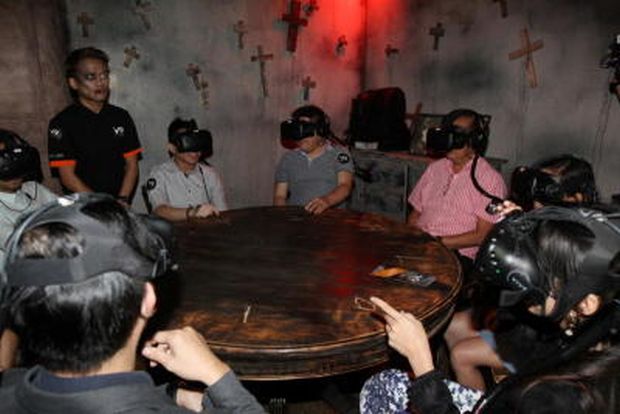 VR enthusiasts experiencing the interactive experience in a haunted cabin -The Others game.

Lee said that they are expecting between 100 and 150 VR enthusiasts to visit the outlet at the shopping mall here.

“We will also be meeting the officials from the Tourism Ministry to work out on how to register this outlet as one of the tourism attraction spots in the country.

“It can be presented as one of the place suitable for family orientation activity,” said Lee.

VAR LIVE Malaysia director Nick Chu said they would be offering special discounts and promotions to the clients at the outlet from time to time.

“We will be giving discount on Christmas Day, and we will also introduce new games according to their interest next month,” he added.

Siblings M.Danesha and M.Heeranish, who visited the outlet, said they enjoyed the VR experience provided by the company, saying that it was “thrilling”.

For the corporate team building event, the company is also offering a 20% discount if confirmation was made before Jan 31, next year.

The company is dedicated to integrating content creation, operation, service and management in VAR LIVE franchise.

For more information about the theme park, it is available on its Facebook page,VAR LIVE MY, or can email enquiries to INFO.MY@VARLIVETECH.COM.