A universal pact against racial discrimination

MYANMAR, South Sudan, North Korea, Vanuatu... What do these countries have in common with Malaysia?

Yes, they all have not signed or ratified the United Nation’s International Convention on the Elimination of All Forms of Racial Discrimination (ICERD).

Malaysia is currently one of 14 countries in the world that have not recognised or signed the UN treaty.

The other countries in this exclusive club include the Cook Islands, the federated states of Micronesia, Marshall Islands, Kiribati, Samoa, Niue and Tuvalu.

Out of 197 countries, 179 countries have ratified or acceded to the ICERD. Four countries – Angola, Bhutan, Nauru and Palau – have signed the ICERD but not ratified it.

The treaty was first mooted in the early 1960s in response to the growing racial discrimination and religious intolerance in the world.

In 1965, the ICERD was adopted unanimously by the UN General Assembly, with one abstention. The Convention came into force in 1969. 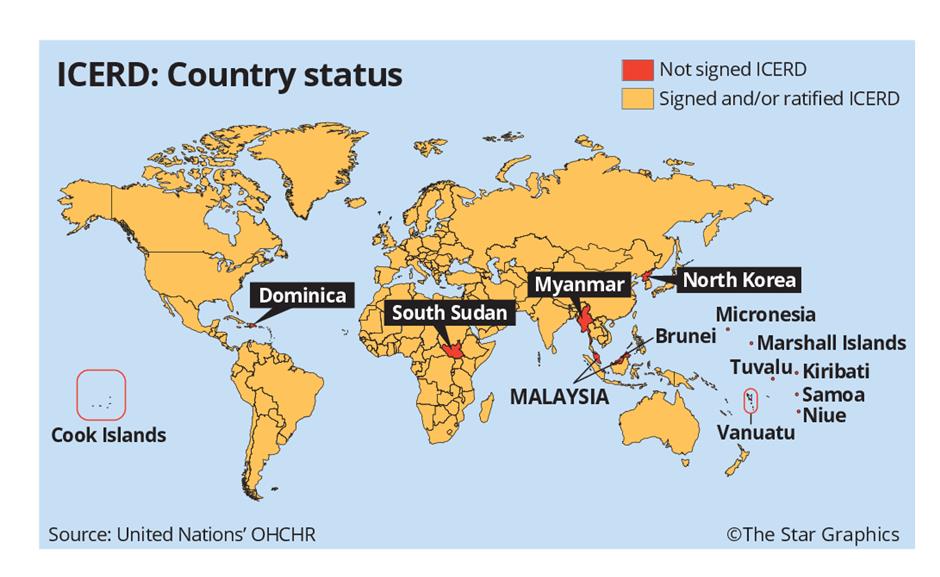 Malaysia and Brunei are the only Islamic-majority countries that have not signed ICERD. All 22 states of the Arab League, Iran, Turkey, Afghanistan and Indonesia, among others, have signed and ratified the treaty.

However, many countries only agreed to be bound by ICERD with certain reservations.

Reservations to parts of ICERD are allowed as long as they are not “incompatible with the object and purpose” of the treaty. Even the US has made a reservation: it does not accept any part of the Convention that would oblige it to criminalise hate speech.

Many – including China, India and Thailand – do not accept a provision that allows national ICERD disputes to be referred to the International Court of Justice. Singapore, which only ratified ICERD in November 2017, reserves the right to apply its own policies on foreign workers, “with a view to promoting integration and maintaining cohesion within its racially diverse society”.

Most of the Islamic states that have ratified ICERD state that they will not recognise or establish relations with Israel.

Saudi Arabia is the sole Islamic state that has a reservation that it will only implement the ICERD provisions that do not conflict with the Islamic Syariah.

Tonga and Fiji reserve the right on indigenous citizens’ land. In fact, many countries that have ratified the ICERD have affirmative action policies to ensure marginalised and indigenous groups are given some privileges to help them move up the social and economic ladder.

This is clearly stated in the treaty: state parties are allowed, “when the circumstances so warrant”... to use “positive discrimination policies” for specific racial groups to guarantee “the full and equal enjoyment of human rights and fundamental freedoms”.

And while the treaty obliges signatories to “pursue by all appropriate means and without delay a policy of eliminating racial discrimination in all its forms”, some have questioned its effectiveness in eliminating racism and hate crime.

Just look at the world today.