Tan: “When we first started, we felt that we needed to preserve the environment. In the process, we also make a profit.”

WHEN Gilbert Tan first heard that China was planning to ban the import of plastic waste into the country, he immediately got a bad feeling about how it was going to affect Malaysia and the recycling industry.

“I had this fear that they would not follow the rules and regulations. This would mar the whole plastic recycling community,” he says.

The managing director of Green Concept Technology Sdn Bhd, a company that recycles and manufactures plastic, was proven right by the recent expose of illegal recycling factories that had popped up in Kuala Langat.

Many of the sites in Kuala Langat were surrounded by mountains of plastic waste while a strong chemical stench permeated the air.

Local residents complained that the smog from the burning and melting of the waste by these “processing plants” had caused them health problems including eye, throat and breathing discomfort.

For Tan, this development has cast a bad light on the legitimate recycling companies like his. Valuable junk: Workers sorting out the plastic waste before it undergoes several processes to be made into plastic resin, which is then used to manufacture new products.

“We are actually doing a good job,” the passionate 60-year-old says as he takes the Sunday Star on a tour of his company which is located in the Pandamaran Industrial Area in Klang recently.

Introducing each and every of his staff member of his company, Tan explains every process – from sorting to washing and mixing the plastic waste, before it is turned into plastic resin.

These small pallets that resemble grains of rice are sold to companies who manufacture stadium seats, office furniture, motorcycle parts and fruit baskets among other things.

All in all, about 90% of the waste that comes in is eventually converted into resin.

While Tan’s company only purchases plastic waste from local sources, there are those that import plastic waste.

However, the process of recycling is the same for all, notes Tan. The issue is whether the operators follow the rules and regulations to ensure that their operation does not pollute the environment.

Tan’s company, which is ISO 14000 certified, follows stringent rules in making sure there is no pollution. This means not taking shortcuts, even if it means higher costs and less profits.

“When we first started, we felt that we needed to preserve the environment. In the process, we also make a profit,” he says.

The government has also established a joint ministerial committee made up of four ministries to look into the issue.

They are the Housing and Local Government Ministry; Water, Land and Natural Resources Ministry; International Trade and Industry Ministry; and the Energy, Technology, Science, Climate Change and Environment Ministry.

The Malaysian Manufacturers Plastic Association (MPMA) supports the temporary ban even though some legit local recycling operators are facing a shortage of materials, which is affecting their operations.

“We regret that but unfortunately, it has to happen to protect the sustainability of the industry,” says MPMA recycling sub-committee chairman C.C. Cheah.

China banned plastic imports earlier this year, leading to a huge impact on the global recycling system. This has also led to a number of Chinese companies relocating their operations to Malaysia, with some setting up shop here as soon as the Chinese government announced the ban in 2017. Only those with APs can import plastic waste, but a few of these legal operators had allegedly sold the imported waste to the illegal operators.

The government has now made it compulsory for those wanting to import waste to get the ISO 14000 certification by June 2019.

Essentially, this means that companies must be free from water, air and noise pollution.

Cheah says that currently all AP holders must fulfil requirements by the Department of Environment (DOE) and the National Solid Waste Management Department.

Various non-governmental organisations, however, have called for the government to totally ban the import of plastic waste, saying there was no reason for Malaysia to become a dumping ground for other countries. Plastics has a bad reputation all over the world, being the most common pollutant found in the oceans that is responsible for the death of wildlife.

He is a supporter of the “circular economy”, which is aimed to retain as much value of products, parts and materials.

He points out that several multinational companies such as Coca-Cola, Unilever and Nestle have pledged to use more recycled materials for their packaging in the near future.

Umeswara, who is also an environmentalist and circular economy consultant, says that some of the recycling companies who imported plastic waste were affected when the ban took place.

These companies were penalised by their customers for not being able to supply the required amount of material needed every month.

If this continues, says Umeswara, the big multinational companies such as those in the electronics or automotive sectors would shift their base to other countries like Thailand and Indonesia.

“If you are going to depend on Malaysia’s raw material it is not going to be enough because our raw material is highly contaminated because we don’t have proper segregation,” he says.

In 2015, it was estimated that only 15% of local plastic waste ended up being recycled.

Umeswara says that Malaysian operators have no choice but to import plastic waste to make their businesses viable, with almost 80-90% of the industry depending on these imports.

The plastic recycling industries have a turnover of RM4.5bil and 13,000 people are employed in the industry, he says, and Malaysian operators import platic waste for the economics of scale needed to sustain their businesses.

According to Umeswara, recyclers can’t get enough waste locally because there are problems at the collection point itself.

“Why has it only become an issue recently? Is there an issue with enforcement or is there an element of corruption?”

He adds, China has now opened up the importation for certain type of plastic waste, particularly Polyethylene terephthalate (PET), which is used to make soft drink bottles.

The ban of these materials has affected the fabrics and clothing industry there as PET is used to make garments.

Moving forward, the MPMA urges the government to set a quota on how much plastic waste can be imported into the country,

“The plastic recycling industry should be allowed to go about its activities, provided that it is regulated,” says Cheah, adding that they are willing to reduce imports if more local scraps were collected to meet the industry growth.

They only want sufficient imports that the local industry needs and can handle, says Cheah:

“We don’t want to import the whole world’s waste. We do not want limitless imports.” 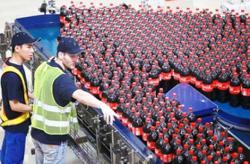